Pie in the sky? Nah. Pie in Kelley Square in Worcester

My mother was a baker, a scratch baker.

My father had a sweet tooth – as did the majority of this children (3 or 4 out of 5 ain’t bad), so we had desert every night. Which meant my mother was baking a few times a week.

As I said, she was a scratch baker. Oh, there’d be a box of Betty Crocker on hand for an emergency situation. And she used a mix for angel food cake. But other than that…

There are plenty of those deserts that I’d just love to sink my sweet teeth into: Jack Horner cake (made with prunes, of all things); quick coffee cake; pineapple-cherry-walnut squares (such pure sugar, it felt as if someone were sitting in your mouth, attacking your teeth with an awl). And Liz was an especially good pie baker. Apple pie baker. My sisters are both excellent pie bakers – not me; I bake, but am no good with crust – but there was nothing like my mother’s apple pie. The other matchless pie was my Aunt Margaret’s pecan.

All this scratch baking talk aside, when I was a kid, I craved store bought desert, which we’d have once in a blue moon. Sometimes it was a jelly roll. Sometimes a chocolate-covered, sicky sweet loaf cake from the Lucky Bakery.

And as a Worcester girl, I always wanted a Table Talk Pie.

I think the four-inch “snack pies” were a nickel a piece when I was a kid. One summer my sister Kath worked in Kelley Square, where Table Talk was located, and she could get pies discounted, in bulk, at the Table Talk Pie store. Yummers.

The apple and pecan weren’t much – no topping Liz and 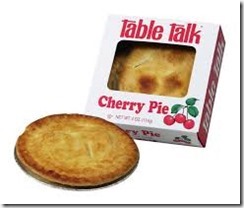 Peg on those fronts – but I loved the gluey pineapple, the gummy lemon, and the fabulous cherry.

My favorite Table Talk Pie memory was a hiking trip my roommate Joyce and I took one nice summer day when we had a a day off from our college summer waitress jobs at the Union Oyster House. We knew nothing about camping at that point in our lives, but we were game. So we headed up to Mt. Washington, wearing tee-shirts, cut-offs, and – ta-da – our white waitress shoes. We had a crummy backpack and a canteen, packed with our toothbrushes, sweatshirts, and provisions: a couple of ham sandwiches and a couple of Table Talk Pies.

We made it half-way up Mt. Washington and camped at the foot of Tuckerman’s Ravine, surrounded by a bunch of serious campers, all cute guys, all our age.

They took pity on us and fed us, but we didn’t want to gorge on the food they’d humped up the mountain, so we ate daintily, then snuck off into the woods and ate our goodies. We were pretty embarrassed, so after gobbling the pies, we crumpled up the cartons and aluminum plates and – I’m ashamed to say – tucked them into crevices between rocks, saving face (if that was possible, given the waitress shoes in lieu of hiking boots) but despoiling the wilderness.

Anyway, I’m always interested in home town fare – I still drink Polar soda – so I was delighted to read in The Boston Globe that Table Talk is growing:

Worcester-based Table Talk Pies is expanding its operations with Thursday’s official opening of a 50,000-square-foot manufacturing facility, adding more than 50 jobs to its 300-person workforce.

The space, in the South Worcester Industrial Park, will help the company increase production of its snack pies, to 4 million a week from 3 million. The pies, which come in larger sizes, too, have long been a staple of snack shelves. (Source: Boston Globe)

I have no idea how widely Table Talk pies are distributed, but I’m guessing most of those pies are being consumed in the Northeast.

Last year, they re-opened their long-closed retail store. It’s in something that’s being snootily called “The Canal District.” Next time I’m in Worcester, I’ll have to grab a Coney Island hot dog, then mosey on over to The Canal District for a pie. (I’ll take a pass on the pie milkshake. Sounds ghastly.)

Not to mention that TT pies are winning prizes:

Table Talk’s 8-inch salted caramel apple and 4-inch pecan pies recently netted the company two National Pie Championship awards. The American Pie Council, which bills itself as "the leading authority on the nation's most popular All-American treat,” held the competition last May. Table Talk was up against 22 bakers and 470 pie submissions. The pie company was recognized in the Commercial Division. (Source: Mass Live)