When I was a young and romantic girl, one of my favorite songs was People, as sung by Barbra Streisand. Like so many of the soupy, gloopy songs I listened to, the words didn’t always make a ton of sense.

Oh, the lyrics to People weren’t as outright dumb and ridiculous as those of, say, Last Night at the Dance, I Met Laura (Strange Things Happen in this World).  And, unlike the words to Louis, Louis, People’s lyrics were comprehensible.

People, people who need people, are the luckiest people in the world?

I thought of the song People for the first time in a while when I saw an article in a recent Economist that focused on Japan’s demographic problems and the depopulation of some of its towns and cities. Okay, it wasn’t quite the saddest article I’ve read in a long time. That would be the story in the Washington Post on how some poor folks in West Virginia tramp through rattlesnake-infested hills to gather roots that they can sell so that they’ll have a few bucks in their pockets until their next disability check comes in. Now that was a depressing read.

But this line from The Economist article on Japan’s problems didn’t exactly put a smile on my face:

Some villages are so depopulated that locals have decorated them with mannequins to provide a semblance of activity. (Source: The Economist) 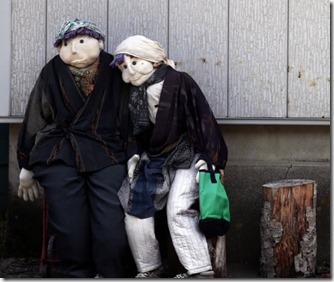 oddities. The obsession with Hello, Kitty. The men who have “relationships” with sex dolls. The whole anime thing. Etc. But placing mannequins around “to provide the semblance of activity”? Is that supposed to uplift the spirits of the left-behinds? I don’t see that happening. Especially if the mannequins resemble this jolly duo. Oh, my husband and I are just heading home to commit suicide…Wouldn’t it be better to have young folks mannequins, heading out clubbing, say? Or would that be even more pathetic and gloom-inducing?

Of course, strategically deployed mannequins are not the real problem, just a symptom of (antidote to?) the issue of a greying and declining population. Most developed nations face a greying population problem. People – although not necessarily in the US: I read recently that our lifespans are going down – are living longer. And developed nation dwellers are having fewer kids – especially in places like Japan -  so the proportion of olds to youngs is growing more out of whack, putting more of a burden on the youngs to pay for the upkeep of the olds. (No wonder they dislike us so intensely. But just wait until it’s their turn.) It would, of course, be cheaper to support geezer mannequins, but, fortunately or unfortunately, most grey hairs are alive.

All this is exacerbated in Japan by the fact that the country is, historically, somewhat resistant to immigrants.

Come on, wouldn’t you rather see a couple of Mexicans running a street food stand on the corner? Some African guys hawking umbrellas? Better than having your walls held up by a couple of aging mannequins…

Several years ago I remember reading the story of how the lyrics to the People song were written. The original wording was different, but, they decided it didn't go as well with the melody as the lyrics they ended up choosing. The lyricists thought just as you do about the concept of "people who need people." The lyricist Bob Merrill also wrote the lyrics to "How Much is That Doggy in the Window?" Now, that explains quite a bit.

Pink Slip said...
This comment has been removed by the author.
4:21 PM

Franny - Thanks for that interesting tidbit about the "Doggy in the Window" lyricist. Arf!