Intellectual property just ain’t what it used to be

Well, last January, the big “intellectual” property story was about real or was it fake or was it real fake mermaid tails. But that was then and this is now and, as it is October, today’s big IP story is Halloween-related, and has to do with banana costumes.

In truth, I don’t give all that much thought to costumes in general or to banana costumes in particular. In truth, my Halloween focus is on the presence of candy corn, already on the shelves in CVS, and Oreos with orange filling, not yet on the shelves at my grocery store. There is, after all, nothing better for body and soul than a handful of candy corn. Some people throw out the term “it’s like crack” to underscore that something’s addictive. But what do most of us actually know about crack? Not much, I suspect. So I’ll offer a helpful alternative. How’s about “it’s like candy corn.” As for Oreos with orange filling, I’m mostly an Oreo purist, but I do like the ones with orange filling, even if they taste exactly the same as the originals. There is just something festive and doubly enjoyable about those special occasion Oreos.

Costumes, however, don’t occupy much of my consciousness, other than when I’m walking around Salem doing a running commentary on some of the really awful costumes there are out there, worn by adults who should know better.

But the Halloween of my childhood – when kids dressed up, in either home-grown or cheesy Woolworth’s costumes and collected candy in whatever paper bag or pillow case their mother handed them – has long been co-opted by grownups and has become a big deal. Americans are now spending more than $9 billion on Halloween-related merchandise, over $3 billion of which goes to costumes. And within the realm of costumes, banana costumes have, apparently, become a big deal.

Just google banana costume and out will pop all sorts of versions. Unpeeled banana, with or without Chiquita label. 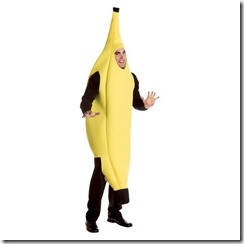 Peeled banana of some sort. Zombie banana. Jamaica-mon banana. Baby bananas (aww….) Dog bananas (aww…) Not to mention a totally inappropriate flasher banana, peeled from below with a big “it” hanging out.

Turns out, those bananas are big money, so much so that one seller has gone to federal court to defend its banana designs. The phrase “banana suit” now has a dual meaning thanks to a complaint filed in New Jersey federal court. Silvertop Associates, Inc., a costume manufacturer which does business as Rasta Imposta, sued Kmart Corp. and Sears Holding Corp. on Wednesday, alleging copyright infringement, trade dress infringement, and unfair competition. (Bloomberg)

Since 2008, Kmart has purchased costumes from Rasta Imposta, but the two companies failed to reach an agreement this year and Kmart said it would use “another vendor” to fulfill banana costume orders, according to the complaint. “Shortly thereafter, Rasta Imposta discovered that Kmart had begun offering the infringing … costume, which is a direct replication and knockoff of Rasta Imposta’s copyrighted Banana Design,” the complaint states. “Kmart is not free to simply appropriate Rasta Imposta’s intellectual property for its own business advantage without Rasta Imposta’s consent.”

I looked at their website, and Rasta Imposta seems to specialize in a combination of completely boring, completely pedestrian, completely vulgar, and some that would be passably cute or clever if you made them yourself. (And take it from someone who spent plenty of time in fourth grade trying to make a Peter Minuit peg leg out of a beer bottle, DIY for a Halloween costume is actually quite fun. Not that I gave a hoot about Peter Minuit, but for the school Halloween party we had to go as a historical figure from American history. Betsy Ross and Pocahontas seemed to be the only alternatives for girls, and I just plain wasn’t interested in either of them. And the idea of using a beer bottle for a peg leg. Even though I never did quite get it to work, it was a fine idea. Like so many of my fine ideas, it lost something in the execution.)

I suspect there’s not much money to be made in Peter Minuit costumes. But banana costumes, well, that’s another story entirely.

Rasta Imposta has been at it since 2001, and they even got a copyright registration a few years back.

The company licenses out the design and considers the banana “one of the company’s most important costumes.”

So they’re not taking it easy.

While two companies can certainly make dueling banana costumes, in the latest case Rasta Imposta argues that these two are entirely too similar, citing the shape, the black ends of the banana, the vertical lines down the middle of the costume, the cut outs for limbs, and even the advertising, which uses a similarly dressed model.

Am I missing something here? Don’t most bananas – that is, real life bananas – have blackish ends and vertical lines. And wouldn’t a banana costume require “cut outs for limbs” – after all, a trick-or-treater needs legs free to get around and arms free to hold the candy-collection bag. Or, if you’re at a grownup party and not roaming the streets looking for loot, arms free to hold an adult beverage. And how different are people going to look posing as a banana in advertising?

However Rasta Imposta v. K-Mart and Sears turns out, I’m sure the loser will, ahem, appeal.

Guess intellectual property just ain’t what it used to be…