The man who desired streetcars

Unless you count reading and conversation, other than blogging, I’ve never really had a hobby. Sometimes I think that it would  just swell – in an earnest, 1950’s kind of way – to have some mono-obsession: stamps, coins, model airplanes, paint-by-number, collecting teacups or spoons. Then I shake my head and get back to my book or my conversation. Hobby case closed.

Then I read about Ivor Walsh, and all of a sudden I was gripped with a case of hobby envy. Or, if not hobby envy, then a real hankering to see the documentary about him, Tiny Tracks. What a fascinating tiny little story.

Ivor Walsh was a man who loved streetcars, and he traveled the world to check them out. But his favorite destination was Boston, where he traveled with some frequency from his home in Toronto to gaze longingly on our streetcars, mostly the Green Line, which travels 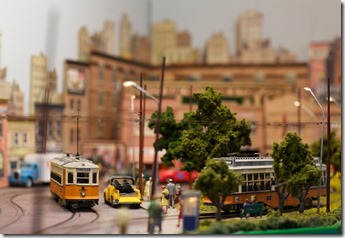 both above and below ground. And sometimes the above ground runs right smack dab down the middle of a street. In the case of the E (Heath Street) segment of the Green Line, the streetcars sometimes jockey for territory with car-cars. Mayhem!

When Walsh visited Boston, he took notes and photos. Lots of them. And, one day, he decided to build a model of Boston street scenes, avec streetcars, in the 1950’s.

“He just started and I would watch him and come down to see what he was doing,” says [his widow Hilda] Walsh. “He’d put on Frank Sinatra and away he’d go.”

The two decades of labor is evident even at first glance. The replica, which is built into the walls, takes up the majority of the 20 by 30 foot basement. It shows various stops on the Green Line—Copley, Park Street, Boylston, Symphony, and others—that display the above ground-to-underground transition that fascinated Walsh so much. (Source: Boston Magazine) 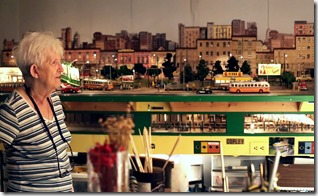 He made tiny guitars to put inside the tiny guitar store. He hand-wired the circuits in hundreds of lights. “He used molds to craft hundreds of tiny Bostonians, and carved the sidewalks’ cobblestones from clay that he tinted himself.” That’s Hilda with part of Ivor’s world.

You may have noticed that the cars on the Green Line are actually orange. This is no longer the case, but when I first moved to Boston there were cars on the Green Line that were, in fact, orange. This was on the now-defunct Green Line – A Line. I’m sure there’s a reason for this. Things like this sometimes do happen. As with the trucking company Yellow, which has signage that’s orange. In the case of Yellow, they did a study way back in the day and determined that the orange they use is the most visible color on the highway. The question there is why they didn’t change the company’s name to Orange. The question for Boston is just plain ‘why?’ I’m sure there’s a reason. Or not.

Anyway, it took Ivor Walsh 20 years to get it all done, down there in his basement, where Hilda Walsh keeps it going more than a decade after her husband’s death. She hopes to find a permanent home for the model transportation system. And she hopes that a new documentary film, Tiny Tracks, by Naomi Hocura, will result in some interest. (The images here are from Hocura’s site.)

If I had 20x30 feet to spare, I’d be giving Hilda Walsh a shout to see if I could adopt Ivor’s labor of love.

I would give it all sorts of TLC. Possibly even turn it into a hobby, rather than just blogging about it.

Surely, there is someone in Boston who does have 600 square feet. Better yet, there is surely some public space in Boston – room in the basement of City Hall, an unused conference room at the MBTA – where this wonderful model could be displayed. Absolutely worth saving.

Email ThisBlogThis!Share to TwitterShare to FacebookShare to Pinterest
Labels: transportation

Maureen - I saw this article about consultants marketing themselves as 'millennial experts' and charging $20,000 a pop for advice.