As a card-carrying pedestrian, I have quite naturally been concerned about the coming of the self-driving car. Bad enough trying to catch the attention of some jamoke about to run a red light while texting when I’m in the middle of the cross-walk. Let alone trying to make meaningful eye contact when you’re jaywalking, which I believe is actually common-law legal in Boston. (Just like common law marriages are recognized in some states, the fact that everyone in Boston jaywalks just must mean it’s legal, if not exactly promoted.)

But what if there’s no pedestrian-hating driver to shake your fist at? No asleep at the wheel jerk who you can wake up by whacking the side of their car as it glides through a stop sign without stopping?

I suppose we’ll still be able shake our fists at the passengers. But the jerks we’ll be waking up won’t be asleep at the wheel. They’ll be dozing. Or carrying on with an all-important collaborative work conference. At best, our whack at the side of the car will startle them a bit. They’ll no doubt shrug their shoulders, give us a wan smile, and get back to the important business of business.

What will pedestrians be able to do in this brave new world? Maybe we’ll all be issued jetpacks, so we can hurtle over these self-drivers?

Perhaps there will be no need. Google – which has saved us in so many ways, c.f., from having to remember the name of the guy who played the butler on Spin and Marty (J. Pat O’Malley); from having to know how to read a map; etc – has come up with a solution to the problem of autonomous vehicles mowing down formerly autonomous pedestrians.

The company received a patent [last]Tuesday describing a way to reduce pedestrian injuries in an accident with a robotic vehicle. The impact of the 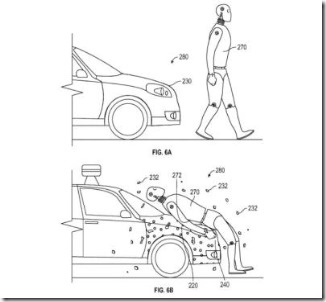 crash, Google suggests, would expose a coating that glues the person to the front of the car. (Source: Mercury News)

"The adhesive layer may be a very sticky material and operate in a manner similar to flypaper, or double-sided duct tape," the patent said.

The pedestrian-as-fly-paper won’t do much to prevent the initial impact injuries, but will prevent anything more from happening when the body is thrown out of the way – or into the path of another car (self-driving or not). This approach, of course, is not without its downside. If, say, the self-driving car that caught you up in its gluey cowcatcher went on to smash into a building, or tree, or Humvee, you could end up worse off than if you were shot into the air and landed in a rhododendron bush.

As for “similar to flypaper.” Well, sort of. After all, no one would want the hood of their car to be covered with the insects, leaves, pebbles, Dunkin Donuts napkins, plastic CVS bags, etc. that would stick to the flypaper. So,

An eggshell-like layer covering the adhesive would protect the sticky surface during everyday driving, but shatter in an accident to reveal the glue.

If you’re wondering how easy it would be to get glue tough enough to hold you on the front of a car off – or to get you off of, “the patent included an option to use a "releasable adhesive" that would allow the person to be unstuck "after a period of time."”

Google may not go through with this invention, but just wanted to make sure that their intellectual property is protected just in case.

My bigger worry is not about taking the driver out of ‘car and driver.’ It’s about what’s going to happen to the millions of truckers, UPS delivery guys, and Uber drivers when they’re no longer needed.

What, exactly, is it at the people are going to do when all the tasks that can be automated are automated?

Thanks to having been married to an economist, I understand that in the long run we’re all dead. But what are we all going to be doing in the meantime?

Email ThisBlogThis!Share to TwitterShare to FacebookShare to Pinterest
Labels: transportation

Rather than glue that would release the accident victim after some period of time (one hopes not minutes or hours after the first responders show up, forcing the victim to lay there stuck on the car being rained on or whatever while waiting to be released and taken to the hospital), Google could design the car so that at the push of a button the front hood becomes detached and used as a stretcher.

Ooops, I better rush and patent that idea before Google steals it from me.