I grew up in a sewing home. My mother made much of the clothing for my sisters and me, starting with the white shorts she made out of my father’s Navy whites, and the navy Easter coats she stitched up out of his dress blues. One of my favorite dresses – when I was maybe four or five – was a white pique cotton, printed with little flower carts. Although I can picture the fabric perfectly,  I still wish I had a swatch.

I liked going to the fabric store, thumbing through the pattern books- McCall’s, Butterick, and Vogue – and picking out the pattern and the material.

There were plenty of misses – that mustard yellow striped number – but enough hits (cool paisley dress with the dropped waist, the floral print a-line shift I wore to death).

Perhaps the biggest miss, however, was when my mother made bathing suits for me and Kath, and didn’t pick the material all that wisely. Kath’s was a blue-and-white striped ticking, and mine was a turquoise, black, and white checkerboard. Both immediately absorbed water and turned to lead bodysuits. These bathing suits resembled the “bathing costumes” of 1900, when folks would frolic in the shallows in massive garb. We wanted to actually swim a bit, and not just wallow in the shallows. But those suits were too damned heavey. Talk about wearing something to death. That summer, my mother gave in and ended up getting us store-bought tank suits.

Both of my sisters learned to sew and made a lot of their own clothing. I gave it a bit of a whirl, but never mastered the art.

Still, over the years, I continued to enjoy going to fabric stores to pick out material for curtains (which my sisters whipped up for me), and to cover dining room seats (which I could manage on my own, 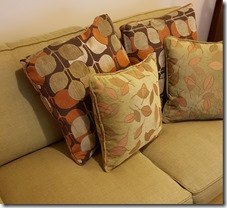 thanks to a good pair of clothing shears and a heavy-duty upholstery stapler). Last fall, in the midst of my reno project, I popped into Winmil Fabrics, in downtown Boston, and found a couple of remnants that went perfectly with the new-old loveseat for the den. The picture doesn’t do this justice. The fabric is simply gorgeous. For $24 I got enough yardage to have four pillows made, and to cover the seat of an old lyre-back chair.

Winmill is a funny place, and you have to wade through the polyester and sequins to find the good stuff, like the remnant table. But it’s just plain fun to go in. It’s such a throwback, with its wooden floors, and it was my go-to for buttons, thread, and press-on tape when I wanted to make curtains without bugging my sisters. Bonus points for the chatty proprietors.

There used to be fabric stores pretty much everywhere. In Worcester, there were plenty of places on Water Street. Weintraub’s, had a branch in Main South where my sister Trish was a salesgirl during high school. Woolworth’s also sold patterns and had some fabric, and I believe that department stores had sewing departments, too. At least I think that Denholm’s, the main store in Worcester did.

There are still fabric stores around – Zinman’s in Lynn has fabulous fabric. But, come June, there won’t be one around in downtown Boston. After 47 years, Winmil is closing, and its owners, Howard and Marilyn Held, are retiring. A dental office is going in.

When Held opened Winmil, Boston still had a garment district.

I remember those days.

I remember looking in at shops where the sewing machines were wearing. And the Dot Hosiery office and showroom for some reason stands out in my mind. The garment district was near Chinatown, where Winmil is located. And there was also an outpost near Boston Garden, where Forecaster of Boston raincoats were made, and where I once had a Kelly Girl gig in a factory that made jeans. (The brand was something patriotic. Was it Old Glory? There was a flag on the label. Anyway, Converse Headquarters is where that jean factory was located.)

All gone. All those stitchers and cutters are in Vietnam and Bangladesh. And no one, other than me the once or twice a year when I have a dress on, wears hose. (Me, I don’t like the look of chicken legs, and I have no desire to slather tanning chemicals on my leg so they won’t look like chicken legs.)

I suppose that next time I need needles or thread, I’ll have to get on Amazon.

Definitely not as much fun as going in to Winmil and chatting with the Helds.

The full article on Winmil is here. You may need a Boston Globe subscription to access it.

Email ThisBlogThis!Share to TwitterShare to FacebookShare to Pinterest
Labels: consuming, growing up