Like any good Baby Boomer, I spent much of my childhood glued to what was then known as the small screen, and later on as the boob tube. Who cared what it was called? Although in our house we were all readers, card players, and game players, and no strangers to the great outdoors (where kids in the olden days played unless there was a hurricane), there was also plenty of TV watching.

Some shows we watched as a family: Ed Sullivan, Perry Mason, Sing Along with Mitch, Wagon Train, Alfred Hitchcock Presents, College Bowl. These were entertainment aimed at grownups, but they were pretty tame by today’s standards. And since most homes contained one TV, there was no doubt what show was going to be watched if there was something the kids wanted to see vs. something the ‘rents wanted to watch. There were, of course, viewing hours reserved for the kids, and the schedule included weekday day-timers like Captain Kangaroo and the Mickey Mouse Club, and all those low budget Saturday morning shows like Fury, Howdy Doody, and Range Rider.

And then there were the in-between shows that had “family” written all over them. Donna Reed, Father Knows Best, Leave it to Beaver. The big attraction of these shows to use kids was that they had kids in them, and that’s what we mostly wanted to see. I was fascinated by any show that featured children, and early on interpreted them as providing a true portrait of how Protestants lived. Two-to-three kids, no one ever yelled, kids squabbles were nowhere near a blood sport, big houses with nothing stray sitting around – like a magazine or a library book… I didn’t know anyone who lived like that. I didn’t know any Protestants. Ergo…

The family I most envied on these Proddie shows was the Greggs on Bachelor Father. Who didn’t, at one point or another, want to dump their family of origin and go live with a rich, handsome uncle who doted on you? I didn’t like thinking through how this was going to happen. First of all, I really didn’t wish my parents and siblings dead. Just, on occasion, temporarily out of the picture. And I didn’t have an uncle like Bentley Gregg – played by the dashing John Forsythe – waiting in the wings to come swoop me up in his convertible while the rest of my family was, say, confined somewhere with typhoid fever, from which they would all recover in good time. The closest I came to a dashing uncle was my Uncle Jack, who was quite good looking and a part-time musician. But he had a wife and a kid, and no convertible, so he wasn’t going to swoop in and save me.

I don’t recall my parents ever shared the watching of the supposed family shows. I suppose they were sitting somewhere else, talking or reading Ellery Queen mysteries.

But mostly the family fare shows were kids’ terrain.

One with crossover appeal, however, was Mr. Ed, a show about a talking horse. Mr. Ed did not speak to everybody. He spoke only to his owner, Wilbur Post, and much of the plot revolved around people thinking that 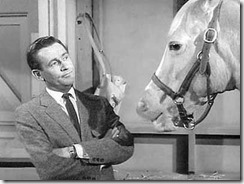 Wilbur was a bit dotty because he was often overhead talking to himself. Of course, of course, we in the audience were in on the gag. We knew Wilbur was deep in conversation with Mr. Ed.

A couple of time, Mr. Ed would break out and say something to a kid. When Wilbur would ask him why he took the risk of exposing himself as a talking horse, Mr. Ed would answer “Who’s going to believe a kid saying a horse can talk?” (I can’t recall the context in which it came up, but there were a number of occasions on which my husband would use this line, always noting that he was quoting from the famous Mr. Ed.)

It is difficult to explain, in this day and age of special effects – Mr. Ed’s lips moved when someone tugged on thin nylon thread under his lip - and sharply written dialog, just how funny and charming this little show was. Or at least is in my memory.

Of course, of course, I haven’t seen an episode in 50 years, but I remember liking it and finding it funny in a way that I didn’t find many of the supposedly funny shows funny. To me, the Lawrence Welk show was funnier (and least in the make-fun sense) than, say, Green Acres. No doubt I would find Mr. Ed ridiculous, corny and embarrassing. But back in the day, it was one of my favorites.

Anyway, Bamboo Harvester, who played Mr. Ed, died quite a while back. But Alan Young, who played Wilbur, died just last week.

When the show was being cast, the story goes that comedian George Burns, who ran the production company that was producing Mr. Ed, told his casting staff, “Get Alan Young. He looks like the kind of guy a horse would talk to.”

And we could, of course, all take a lesson from both Wilbur and Mr. Ed.

From Wilbur, we learn how to be a good listener, a good friend, and how to keep a secret.

And from Mr. Ed we learn – or not – to never speak, unless we have something to say.

So long, Alan Young. You done good by us little TV-watching Boomers.

A Pink Slip shout to Rick T., my brother-in-law, who was hot off the press, sending me a link to this bit of news.

Email ThisBlogThis!Share to TwitterShare to FacebookShare to Pinterest
Labels: growing up