I've been asking around for book, movie, and TV binge recommendations.

Don't know why I'm bothering for books, because I'm good. I still haven't tackled the latest Hillary Mantel, and I've got a Don Winslow right behind it. Then there's ColsonWhitehead's Nickel Boys and a bunch of other books piled up on the armchair in my bedroom. (I always wanted an armchair in my bedroom. So convenient for piling books on and draping clothing over.)

Movies I'm okay on, too. I'm backlogged. I still haven't seen Manchester by the Sea...

But series I've really needed help with. Succession, The Queen, My Brilliant Friend, Bosch. All done until next season. I've tried to get into Ozark, Schitt's Creek, Catastrophe, Call the Midwife, Six Feet Under, Deadwood, and a bunch others, but nothing seems to stick. I'll watch a few and then lose interest.

Then a friend told me that the reruns of Spenser for Hire are on Amazon Prime, and that the Boston locations made it worth watching.

So I found me way there and have been doing a modest amount of binging - a couple episodes here, a couple there - and watching the Boston of 35 years ago is something I'm finding wildly entertaining.

Much of the show's location shooting took place in my neighborhood, and the residential areas, the Boston Common, the Public Garden, all look pretty much the same. Oh, they take some liberties. Spenser, his girlfriend Suze, and Suze's ex meet for drinks in an outdoor restaurant at the foot of the statue of Washington in the Public Garden. NO. SUCH. THING. Not then. Not now. 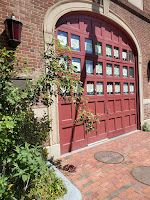 Spenser lives in an old firehouse, now the community center where I vote, and just around the corner from where I lived when the show was in production, seconds (45 seconds from where I lived, to be exact. I walked by the other day and timed it.).

I have only vague recollections of seeing Spenser being filmed. (And I'm pretty sure that if I'd seen someone as fine looking as Robert Urich, I'd remember. So I'm saying I never actually spotted him.) But there were two ways into the alley off the alley where we lived, and the one we took 99% of the time went right by the Spenser firehouse. So I'm sure I tripped over cables and got ordered around by cameramen every now and then.

A lot of the location spots take place in my hood, and it's fun seeing what's changed and what hasn't. Walter's Lock and Hardware! I'd forgotten when that was a storefront on Charle Street. And there's Spenser and Suze having lunch in the window at Toscano. I would have bet $100 that Toscano's only been around for about 20 years, but there it was, in 1985. (Tempus sure does fugit.)

I love seeing Spenser buzz around Cambridge - hey, that's MIT's Sloan, my business school!; that's Passim's!). Around the Haymarket/Quincy Market area, with its great old sign for the now defunct Durgin Park, where I worked as a waitress in the early 1970's.

The strangest thing is when he's chasing bad guys around the Boston waterfront.

Back in the 1980's, that area was largely a bunch of decaying, derelict warehouses, a few restaurants (Anthony's, Jimmy's Harborside, No Name - all now gone), and some dirt parking lots.

Now the area is completely developed: office buildings (often occupied by tech companies that moved from the 'burbs to downtown because it's cooler and downtown is where techies want to live), pricey condos and rentals, nice restaurants, shops. A lovely harborside walk. It will be interesting to see how all of this survives the pandemic, but every time I walk down there, I'm in awe of how it's gotten so built up in the last decade or so.

Ditto for Kendall Square in Cambridge.

There wasn't much there when I was in grad school (a few years before Spenser went on the air), but of late it's full of stuff. Lots of tech and biotech and all that brings with it.

One of the biggest changes in the Boston scene is thanks to the Big Dig, which took the monstrous overhanging Central Artery that separated downtown Boston from the North End and put it underground. Vast improvement, but still fun to see the old artery. And the old Boston Garden. And a lot of the old other stuff.

Love seeing Urich in all his Red Sox gear, too. Although having read the backstory that says that Spenser went to Holy Cross, I'm a bit surprised to see him in a Boston College sweatshirt. Unless they've lost a bet, HC folks don't wear BC gear, and vice versa.

The show itself is ridiculous, the plots completely absurd, even by TV standards.

Boston is not an especially violent city, but if you watched Spenser, you'd certainly come away with the impression that, in the mid-1980's, Boston was wilder than the Wild West.

Spenser comes out gunning. In most of the shows I've seen so far - maybe half a dozen - he's managed to kill a couple of bad guys in the first couple of minutes of the show.

He's bodyguarding someone who's running the Marathon. Bad guys kidnap his protectee, but Spenser takes chase and manages to blow 3 - or was it 4 - of the kidnappers away.

He's bodyguarding a high school girl but - and Spenser must be a mighty poor protector - she gets kidnapped before his very eyes. But he did manage to kill one of the kidnappers.

He's shopping for watermelon in the North End and a guy on roller blade tries to knife him, but gets the watermelon instead. Spenser goes after him, breaking up an Italian festa religious parade in the process, and guns the bad guy down.

I don't think I've seen any episode where Spenser hasn't shot and killed at least 3 people.

Then there's his wingman, Hawk, who was/is a contract killer. So if Spenser's not doing the killing, Hawk is.

I know I read some of the Robert Parker Spenser novels in the wayback, and I'm sure I enjoyed the fact that Spenser quotes Shakespeare, Plato, the poet Spenser (relation? no relation?). But in the TV show it comes off as wooden and completely non-charming.

As does his relationship with Susan Silverman, at least to me.

They're supposed to be this ultra hot, lovey-dovey, sexy couple, but the chemistry between the two makes the byplay between Rock Hudson and Susan St. James on MacMillan & Wife seem torrid.

There's one scene where I cringed.

Shortly after Spenser moves into the firehouse, Suze surprisees him there in a pair of red silk PJs and a plastic kid's fireman's hat - and shimmies down the station's firepole to greet him. Only she doesn't wheeeeeee! down it with abandon. She kind of scuds along, hanging on for dear life. Which is how I would have come down that pole. So maybe it's realistic, but it sure wasn't sexy.

Will I keep watching? Hell, yeah!

Can't wait to spot more errors. Hey, that mansion's not in Louisburg Square, it's on Mt. Vernon Street!

There are three seasons, and I'm only a few episodes into season one, so I've got a lot to go.

Recommendations for my next binge welcome.
Posted by Pink Slip at 5:00 AM

Email ThisBlogThis!Share to TwitterShare to FacebookShare to Pinterest
Labels: TV, where we live