I finally got around to doing the old closet flip, switching my winter clothing out and my summer clothing in. It's usually something I do in mid-April, but this year's different.

Mostly, we really didn't have much spring weather in April. Weather-wise, January-February-March-April were pretty much one blur: temps in the 40's, overcast skies, rain... In April, we generally get a string of nice days, when it's sunny and relatively balmy. (I.e., in the 70's.) This year, those days came as onesies.

May is starting to look a little better, but there really hasn't been that much reason to swap out my winter uniform (jeans, turtleneck, fleece) for my summer uni (baggy linen pants, tee-shirt, linen shirt).

Besides, I always keep a few transitional things around for those out-of-season, out-of-synch days that do happen from time to time.

But the main reason I hadn't bothered to change out my clothing was the big IT that's hovering over most everyone, wringing so much joy out of most everything.

So there I was, doing the clothing flip and all it was doing was making me feel kind of sad.

Not that I was planning on going to any wedding or 50th anniversary party this summer, but I was feeling a bit melancholy when I took out that artsy periwinkle and silver silk jacket. Unless I decide to wear it around the house someday, I won't be needing it.

Even my regular "nice" stuff. The good black pants. The long Eileen Fisher dress. That cute little sweater, the embroidered one. All those items that I wore when I went out to dinner. Maybe next year.

Oh, there were some positive aspects to the flip. I finally got rid of those pointy-toed patent leather kitten-heel slingbacks that I bought for some wedding or another in the way back. The last time I remember putting them on (and kicking them off) was 5 years ago, when I went to the wedding of the daughter of friends. Fortunately, I was staying in the hotel where the reception was held, so once I kicked those shoes off and under the table, there was no need to put them on and agonizing. I just walked back to my room in my stocking feet. So, out those shoes went. Into the trash. No demand for pre-owned pointy-toed 11 2A patent leather kitten-heel slingbacks.

I tossed out another pair of dressy shoes, as well. Also wedding-worn. Peau de soie, pale gray, peep-toed, low heeled. Went quite well with the periwinkle and silver jacket. But stunningly uncomfortable. I had already replaced them last year with a far comfier pair of silverish flats. So, outie-out-out with them. No regrets.

Clothing doesn't take as long to switch as it used to when I worked full time, and had all sorts of work clothing. I culled that herd long ago. But I still have a fair amount of clothing. And I went through somewhat ruthlessly, setting aside things that weren't quite "me," that don't fit right, that I got on terrific markdown but never really liked. (What was I thinking when I bought that blue-green-brown peasant-y shirt? Those colors were so ugly.)

Where to donate my discards presents a problem, as my fallback clothing donation place (St. Francis House) is not taking clothing donations for the duration. I already have 3 bags full of SFH donations from my sister Trish taking up residence in my living room. Now there's a lot more.

I think Goodwill will take the stuff. Here's hoping.

I paused over some of the keepers. This gorgeous peasant-y blouse - I never give up on peasant-y blouses - that I got at Nordstrom Rack, marked down from $397 to, well, next to nothing. Purchased during the winter, when optimism about spring and summer was running high. I won't be wearing that one anytime soon. I mean, it's really overkill for a solo masked walk along the Charles River.

But what really brought the abnormal new normal never normal again home was when I looked through my pocketbooks.

I don't have a ton of pocketbooks. (Just don't ask me about tote bags and the like. I still have a canvas duffle bag I bought in Lord & Taylor in July 1970.) But, purse-wise, I'm not running on empty, either.

This great pink and blue flowered bag - reversible to a cool black and white paisley print - that my sister Kath gave me. It came from a boutique outfit - 1154 Lill - that had a shop on Newbury Street. The company was out of Chicago, and for a while it was a darling. But their FB page hasn't been updated since 2011, and their website is defunct. I love that bag. It's just lovely. It just won't be seeing the light of day this summer.

Ditto the Dooney & Bourque periwinkle pockebook (another steal from Nordstrom Rack) that was my regular summer bag for a couple of years. I really don't need anything quite that good when I go to the hardware store on Charles to see if they've gotten any Clorox wipes in.

The cheapo light turquoise bag I got in Venice a few years back. I know, I know, it says "Made in Italy" on it, but I'm pretty sure that's just a bad translation of "Made in China." But what seeing it made me do is think of that super trip to Venice a few years back which I made with my sister Trish. Magic! Not that I was planning on going back to Venice anytime soon, but it looks like I won't be going back to any place anytime soon. I enjoy travel, so this made me sad.

The cute crocheted bag my sister Kath made me - in all my colors - and lined with pink polka-dot fabric. So cute! I guess I could carry it when I head out to the drugstore to buy some bobby-pins to keep my hair out of my eyes.

But, for whatever reason, I was saddest when I came across this bag: 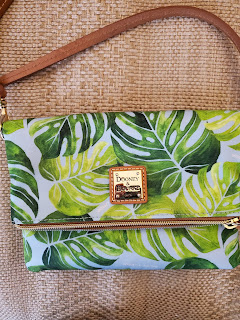 I got it just last year, online, on markdown. I love the colors. I love the print. I goes especially well with a dressy little sweater in those very same colors. The bag doesn't hold much: credit card, keys, phone. But it's crossbody and great for going out to dinner. Which I won't be doing this summer. Sure, I plan to patronize some restaurants, but it will on a grab and go basis. No cute pocketbook required.

But I'm getting a bit bored, and a bit stressed, and a bit antsy for IT to be over. And I recognize that these feelings - just like that little Dooney & Bourque bag - are luxury goods.

There are millions who don't have jobs. Who are broke. Who may lose their homes. Who can't pay the cable bill. Who don't know where their next meal is coming from. Who aren't fretting about whether they'll be able to wear a $397 peasant-style shirt - seriously: completely marked down; practically free - this summer. Or ruing the fact that they won't be able to use a nice little crossbody bag because they won't be going out to eat.

Truly, I'm sadder for the folks who aren't working in restaurants and need those jobs than I am for my own tiny sadness about not being able to carry this pocketbook. Still, there's no denying that this makes me a bit sad. These days, shitty just seems to be getting shittier, all the way around.