When I heard that an art collective was cutting up a Damien Hirst print and selling it off in pieces, my initial reaction was WTF. Destroy a work of art! How dare they? 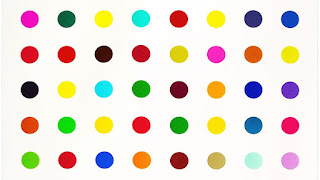 What next? Cut off the pearl earring from The Girl With?

Then I read the article, and read a bit more about MSCHF, the group behind the sale, and now I'm all LOL. Make that ROFLMFAO.

These folks are brilliant, hilarious, and - in the case of the Hirst cutup - spot on!

Here's what MSCHF did with the Hirst print - a signed copy of one of the artist's iconic works:

After paying $30K for it, they renamed it "Severed Spots" and cut all the spots out. They then sold them for $480 a piece. Even more brilliantly, they put the remaining white space ("Spotless Painting") up for auction and were able to sell that for $261,400.

Although I can't imagine who'd pay all that money for "Spotless", it's likely someone gambling on it going up in value. And a critique of the fine art biz is much about what MSCHF was up to with this project.

A manifesto published on the project's website describes fine art as being a "tailor-made vehicle for the affluent to store their wealth." It also criticizes collectors who buy artworks, only for them to be "stashed" in tax-avoiding freeports, "awaiting the day they might be brought to light once more ... to be flipped like a giant bill in a colorful currency arbitrage." (Source: CNN)

All that crazy money chasing art, not so it can be displayed in a museum and accessible to us hoi polloi. Not so it can be hung over the fireplace so that the acquirers can park their arses on the couch and enjoy - and gloat over - it in private. But so that it can be stored somewhere, out of sight but hopefully not out of the mind of the art market, while it appreciates in value.

MSCHF also wanted to experiment with the concept of fractional ownership, which offers individual investors to buy into an art work on a share basis, hoping to cash in (cash out?) bigtime.


From one owner to many - a distinction immaterial as long as the piece is destined for a storage locker in Gibraltar. The difference, of course, is that we’ve taken it literally and made a stop at the knife shop while we’re at it. (Source: Severed Spots Manifesto)

And that difference means that each of the fractional owners gets to actually gaze upon and enjoy their work of art. All for the low, low price of $480. Love. It.

"Severed Spots" is just one in a series of bi-weekly "drops" coming out of Brooklyn-based (where else?) MSCHF, which started out as an off-beat agency doing off-beat campaigns for on-beat brands, decided after a couple of years that it might be more fun to do their own thing. (By the way, the company's founder, Gabriel Whaley, is a West Point drop out. Fun fact!) Just what is MSCHF?

Categorizing MSCHF isn’t easy. Is it a marketing agency? Is it an e-commerce platform? A novelty “gag gift” product retailer? An artist collective? Some kind of meta-parody of the four that, like Schrödinger’s startup, is all of the above and none of them at the same time? No one description entirely adds up.

“It’s very hard to actually have a one-sentence [description] of what we are because we’re doing something so new in the space,” said David Greenberg, MSCHF’s 22-year-old head of strategy and growth. “A lot of startups go out and they’re like, ‘Oh, we’re DTC (direct-to-consumer) this and we sell underwear online or toothbrushes,’ or ‘we’re Uber-for-this,’ or ‘we’re Seamless-for-this.’ We don’t have anything like that to compare us to. The best way to describe ourselves is sort of just an internet culture brand that launches whatever we want to tell a story in any type of format.” (Source: Digital Trends)

Among the drops that MSCHF has made, the stories they've told:


A pair of custom Nike sneakers with soles filled with holy water from the River Jordan. An app that picks stocks to invest in based on your astrological sign. A bath bomb that smells like strawberry Pop-Tarts and is, somewhat morbidly, shaped like a toaster. A dog collar that translates your dog’s barks into a stream of swear words. And Puff the Squeaky Chicken, a chicken-shaped bong that squeaks when you smoke it. 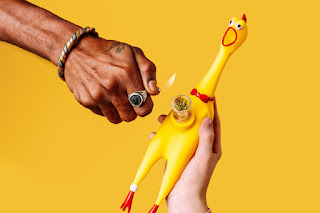 Here's the link to their list of drops. And, yes, I've signed up for the early-bird special, to get a text on the latest. (I'm probably the oldest person to do so by about 40 years.) One of the drops is Boomer Email "a weekly newsletter where we forward unhinged email chains sourced from thousands of real, anonymous boomers." And, yes, I've signed up for that free goodie. And, no, I don't believe I'll spot any unhinged email chains coming from/going to anyone I know. There's Boomers (ranting nut jobs in their MAGA hats, out there protesting social distancing) and then there's Boomers (my mask-wearing friends and family).

But one things Boomers/Boomers have in common is that we're "olds," and  think I'm really going to enjoy seeing what these "youngs" come up with next.

I hope they make a ton of money doing what they're doing. If vapid "influencers" can rake it in, I'm all for rewards accruing to the creative and witty.

If they offered me a fractional ownership in their company, I just might consider it.