Tourist in Ireland, Part Two: “I write it out in a verse— MacDonagh and MacBride”

On Monday morning, after an almost full Irish breakfast (no black pudding) at a Latvian-run B&B, we decamped to Dublin on the train from Belfast. The platform at Dundalk was pretty crowded for a late morning Monday, but it was a long weekend, what with Monday March 19th the day on which the St. Patrick’s Day holiday was observed. My sister and I were the American tourists, trying to maneuver our oversized roller bags down the narrow aisle to the other end of the car where the baggage storage area was. Back at our seats, we found that a) the configuration was different than what we’d signed up for online, and b) someone was sitting in one of our reserved seats. Thanks to another American –  a businessman who’d been visiting a friend in Belfast -  who changed seats on the crowded train so we could sit together (and, while he was at it, hefted our smaller bags onto the storage space above our seats), we finally settled in for the hour long ride into Dublin. Then a short hop to our hotel, The Westbury, right in the middle of everything.

Our mission for the afternoon was the Guinness tour, so that we could learn all about the black stuff.

It was a crisp but sunny day, so we decided to walk out to the Guinness Storehouse, which, we were told by the person at the Westbury desk, would take about 20-25 minutes.

I know that the Irish are fast walkers, but, even though Trish was a bit under the weather at this point, we’re no slouches when it comes to shank’s mare, either. Twenty minutes into our hike, we stuck our heads in at a tourist office, where we were assured it was about a 20 minute walk from that point. Twenty minutes later, when we asked a woman on the street, we were told we had another 40 minutes to go. That was about right.

In any case, we did make it in time for the tour time we had signed up for. Not that it mattered, as they really didn’t check tickets. Meanwhile, in signing up, they asked if you were a senior, so I clicked that box. Only to find out that there was no discount for seniors. So i gave away a key personal tidbit, and got nothing in return. Boo!

The Guinness Storehouse, where the tour takes place, was packed. It was, after all, a holiday, and holiday-ers, many still see 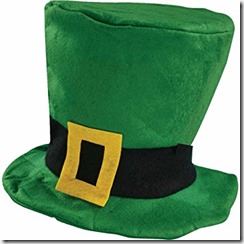 The tour is not given in the factory, but in the Guinness Storehouse, which has a quite modern, interesting, and somewhat Disney-fied telling of the making of Guinness.

We got halfway through, when we took a break. As I mentioned, Trish was a bit under the weather, and the crowds were just overwhelming.

At this point, we decided to cut the tour short, foregoing the “free” pint that we were entitled to. Alas! Guinness (in Ireland) is pretty much the only beer I drink, and I’m guessing that this close to the holy ground where it’s produced, it was a pretty good pint.

Anyway, we cabbed back to the Westbury, too tired for the long walk back.

On the next day’s agenda was a tour of Kilmainham Gaol, where a number of those involved in The Easter Rebellion of 1916 were shot by a firing squad. Unfortunately, Trish was still unwell and opted for a lie-in, while I went out to Kilmainham.

I had toured Kilmainham Gaol some 25 or 30 years back, when it was mostly the building and a few b&w pictures on the wall.

Today, it is one of the most impressive historic museums I’ve been to. And the tour was excellent.

In it, I learned a lot about approaches to imprisonment over the centuries, and about Irish history that I hadn’t really appreciated in the past.

The Gaol was used to punish men, women, and children, under completely ghastly and brutal conditions (up until the 20th century, when conditions ticked up a bit). Many of those thrown i 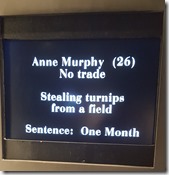 n this particularly terrible and overcrowded hoosegow were people who were starving during the Great Famine of the 1840’s. They (often very young children) were jailed for stealing something as small as a loaf of bread or a clutch of onions. One of those jailed was Anne Murphy, who’d stolen turnips. For that offense, she was sentenced to a month. How hungry would you be to steal turnips? And how close to death by starvation would you have to be that a month in a typhus-ridden and (literally) lousy jail was preferable to trying to survive on the outside?

The museum display (that image above is from a slide show) included mug shots from some of those jailed in the mid-19th century. The prison system was taking advantage of the new photography technology, but wanted to save money. So each prisoner was photographed next to a mirror, so that full-face and profile could be captured in one picture. Which I found pretty interesting.

The early history of Kilmainham was very well delivered, but the main historic interest is the role that the jail played in the aftermath of the Easter Rebellion. This uprising, which took place in the midst of the first world war, was aimed at freeing Ireland from British control and occupation. Fourteen of those involved in the uprising – including Thomas MacDonagh, John MacBride, James Connolly, and Patrick Pearse, the four names mentioned in Yeats poem “Easter 1916” – were shot for their role.

This was a formative event, as it pretty much turned public opinion away from the British and towards the rebels, which resulted in the establishment of the Republic of Ireland. Many Irish citizens had initially been opposed to the uprising, especially given the timing in the midst of a war that many of their young men were fighting in. But then they started thinking things through. When their sons were taken prison of war by the Germans, they were sent to camps, not shot. So why the blood lust to kill the rebels, who considered themselves Irish soldiers? Especially when one of those rebels, James Connolly, was already dying from his wounds, and had to be strapped into a chair so he could be shot at.

As Yeats had it:

Now and in time to be,
Wherever green is worn,
Are changed, changed utterly:
A terrible beauty is born.

The cells where the 14 martyrs spent their last days were all marked on the tour, and there were a number of artifacts related to these men, and to other nationalist leaders.

Kilmainham Gaol was also used during the Irish Civil War, in which those who supported the treaty that had created the Republic of Ireland, at the expense of surrendering six counties to the creation of Northern Ireland, battled those who opposed it. (If you saw the movie Michael Collins, this was Michael Collins (Liam Neeson) vs. Eamon DeValera (Alan Rickman).

imprisoned at Kilmainham. But it’s hard to talk about the history of Ireland without Collins factoring in, so there are some of his artifacts on display, including the scapular he was wearing when he was killed during the Irish Civil War. (My father wore the same scapular – the Sacred Heart badge with red crocheted edging – but, of course, he wasn’t an assassinated Irish rebel…)

Anyway, it was a wonderful museum, and I’m sorry my sister missed it. I like Dublin, but it’s not first on my must-return list. It’s a big, bustling, lively cosmopolitan city, that even feels a bit like the one I live in. But I would recommend the Kilmainham Gaol tour to anyone going to Ireland. It definitely makes a stop in Dublin worthwhile.

I walked halfway back to the hotel before giving up and haling a cab. (And, yes, a guard at Kilmainham assured me that it was only a 20 minute walk back to the Westbury. Since the jail was beyond the Guinness Storehouse, I knew this wasn’t true, but I thought I’d go some of the distance on foot.)

Other than the tours and a couple of run outs for tea, scones, and meds for my sister, that was about it for Dublin.

Fun to read, Maureen. I’m hoping that by tomorrow’s installment that Trish is feeling better.