There are certain things that I’ve hung on to from childhood.

If I watch network news, it’s NBC. I use Scott toilet paper. And I have a sentimental attachment to the Ford Motor Company.

Oh, Henry Ford was a rancid old anti-Semite, but he sure knew how to get a car in every little guy’s driveway.

And every two years, my father was one of them.

There was a little ditty that kids used to sing that went (to the tune of It Ain’t Gonna Rain No More No More:

It never bothered me that it was a poor man who drove a Ford. I knew we were neither rich nor poor. I was just proud that we were a Ford family. After all, if my father drove a Ford, then Ford was the best.

The first car I remember was a two-tone light-green/dark-green Ford Fairlane. Two years later, it was a robin’s egg blue and white 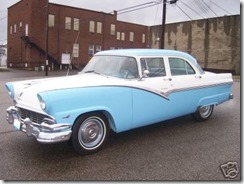 Then there was the solid green Fairlane with the cool fins. Then back to a two-tone with an egg-yellow body and a white roof. Then a colossally boring solid white Fairlane.

The solid white was followed by an upgrade to a Ford Galaxy. This was the first car I remember that had a name: Black Beauty. I learned how to drive on Black Beauty, and it may have been the only car I ever hit 100 m.p.h. in.

Two years after Black Beauty, it was the Green Hornet. Another Galaxy 500.

My father’s final car was a gold Galaxy 500.

We still had the Green Hornet when my father died.

I remember the day that someone from my father’s company came to the house – a few weeks before my father died, but when he was clearly rounding the end of life bend  – to take back the gold Galaxy.

Shortly after my father died, the Green Hornet had to be put out to pasture, and my mother had to get a new car. She went with an Oldsmobile Cutlass.

Given that she worshipped everything about my father, I wonder why she didn’t stay loyal to his brand. Too late to ask.

I don’t know why my father was a Ford guy, either. In his younger days, when his father was a prosperous saloon owner (pre-Prohibition), his family’s car was a Cadillac. My understanding is that Charles H. Rogers never learned how to drive – or was the only man on the face of the earth in the history of mankind (other than my late husband) who was actually willing to admit that he was a terrible driver. In any case, Charles H. – my father’s father – hired a chauffer to take the family on their weekly jaunt from Worcester to Barre, Massachusetts, to visit his folks.

Alas, the family fortune went out with Prohibition, and my grandfather died shortly thereafter.

In any case, my father never owned a Caddie, or expressed any interest in having one.

My feelings about Ford are pretty much nostalgic, warmish and squishy. It’s the brand of my father, the brand of the people. But any brand loyalty hasn’t quite translated into buying Fords. I’ve only ever owned three cars: a used Honda Civic, a new Mercury Tracer, and a VW New Beetle. Yes, the Mercury was a Ford. But I didn’t buy the Tracer because of that.

Still, I was a bit taken aback to see the news that Ford is exiting the mass market that has been its sweet spot since the first Model T rolled off the assembly line.

The company responsible for launching the modern carmaking era with Henry Ford’s assembly line will pivot away from being a full-line automaker, shrinking its passenger-car lineup and shifting only to low-volume, high-margin models.

The reason? Years of coming up short on a long-held profit-margin target. Earnings disappointments cost former Chief Executive Officer Mark Fields his job in May, and his replacement Jim Hackett has since laid out plans to reorient the company around lucrative sport utility vehicles and pickups, plus play catch-up on the trends that are sweeping the auto industry: the rise of electric, autonomous, connected and shared vehicles.(Source: Bloomberg)

Poor man drives a Ford? Not any more…

Email ThisBlogThis!Share to TwitterShare to FacebookShare to Pinterest
Labels: growing up, transportation

You just about gave me a heart attack here since I'm a Ford girl now. But, it looks like they're still going to be making SUVs so hopefully they'll keep the Escape in production (love my car!) Better tell our brother though, as he still drives a sedan.....