If ever there were an argument for a steep inheritance tax

Just before Christmas, in a nice little gift to snarky bloggers everywhere, Wyatt Koch went after his former fiancée, looking to retrieve the $180K engagement ring he’d given her when he started to heed his inner Beyoncé and decided that, if he liked it then he should have put a ring on it.

You’d think someone named Koch would be willing to cut his losses and walk away, chalk it up to a learning experience. But the Koches didn’t get to be kabillionaires by overlooking the chump change. After all, $180K here, $180K there, and pretty soon you’re talking some serious money. It really does all add up.

And it’s not as if Wyatt Koch was one of the uber-Koches. No, he’s not the spawn of Charles or David. He’s the son of William the Lesser whose worthy is a paltry $1.7B. And since William the Lesser is only 77 – and being kept young by a wife a couple of decades his junior – it may be a while before Wyatt gets his. Plus there are five offspring who’ll all be looking to, in the immortal words of Don Fanucci (spoken to the young Vito Corleone) wet their beaks.

Still, if there’s an argument for the inheritance tax, I’d nominate Wyatt Ingraham Koch. And not because he’s trying to grab a bauble back from his erstwhile bride-to-be.

No, it’s because Wyatt Koch – when he’s not swanning around Palm Beach acting rich - is using his time, talents, and treasure to bring some of the most god-awful shirts this side and time of Honolulu in 1951.

His company is Wyatt Ingraham (his middle name 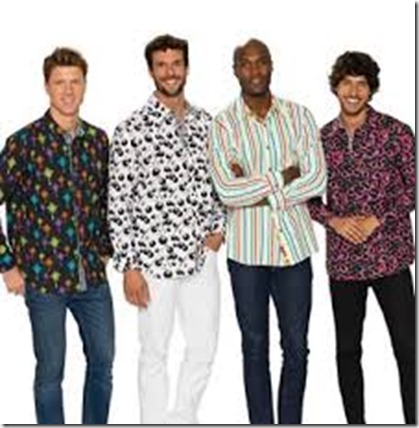 – wouldn’t want to capitalize on “Koch”; plus no one knows how to pronounce it. Kawtch? Coke? Cock?, and Ingraham sure sounds a lot classier and more Mayflowery), and they make shirts that look like this. Okay, the striped one is fine. And maybe even the one with the rainbow splats. But the eight-ball shirt? The the one with the pink handcuffs on it? I’d say they scream douche, but compared to the moneybags shirt, they really only whisper it. 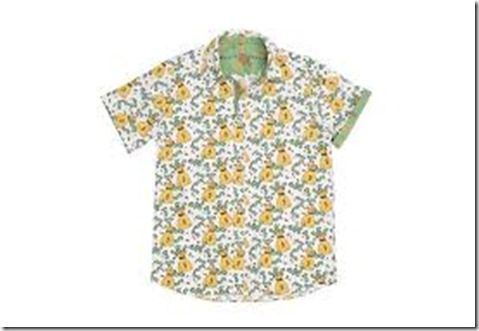 Is this what Scrooge McDuck wears when he’s on vacay?

Only if he got it on sale, I suppose. This shirt – which is called Wall Street, not Moneybags -  is currently marked down from $119 to $79. (Those other ones can be had for $99, down from $139; higher priced because they’ve got long sleeves.) But when you factor in dry clean only, even on sale they’re not a bargain.

“My father said to me, ‘Wyatt, you can do whatever you want to in life. Just make sure you do it well and do it with passion,” the designer said to the camera, without a hint of self-awareness….

“I want my shirts to be able to worn in the boardroom or in the discoteca [yeah, he really pronounced it like that] or a nightclub — or on a yacht,” Koch said with a straight face. “I really wanted to create something that’s fun, outside the box, cool, trendy, yet really bold and interesting.” We’re hard pressed to name a boardroom, outside of the one hosting the board of directors from Spencer’s Gifts, that would feature executives wearing neon pink shirts with a handcuffs pattern, but we’ll take his word for it. (Source: Spin)

Although it wouldn’t be the worst thing in the world, I really don’t believe that men should only wear Oxford cloth blue shirts. Shirts can have colors. And prints. Just not these colors and prints. Prints like checks. And plaids. And stripes. Those kinds of prints.

My cousin Ellen, who spends half her time in Florida, has an expression OFI – Only In Florida – for clothing items that can and should be worn only when in Florida. So maybe it’s an OFI thing. Still, I’m having a hard time picturing her husband Mike in the Eight Ball shirt. (Maybe it’s because they’re Sarasota, not Palm Beach.)

I did recently have a disturbing indication that wild and not-so-wonderful men’s fashion is migrating north, along with kudzu and feral pigs. Here’s something I found 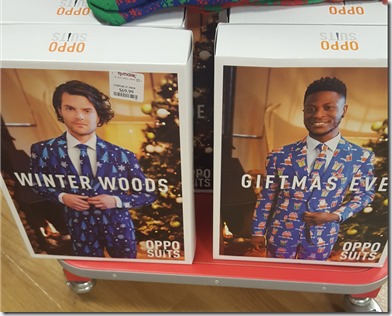 at Marshall’s around Christmas. Some sort of weird PJ suits which seem to have Wyatt Ingraham written all over them. (Hmmm. I’ll have to head back and see if they’re still on the sale rack. I’m thinking excellent Yankee Swap.)

In any case, there must be some demand for this sort of outré fashion. Is it men’s liberation? Throwing off the surly bonds of the suit and tie and letting out their inner whatever? Sure hope not. (Down, boys.)

Me? I suspect that there aren’t enough guys willing to wear those wild and crazy shirts to earn Wyatt Koch a living. But he may never actually have to earn a living. Even if he doesn’t get that diamond ring back. As I said, if anyone needs an argument for a steep inheritance tax…

Thanks to my sister Trish for introducing me to Wyatt Koch. Unfortunately, I can’t unsee any of it.