A few years ago, I found myself intrigued* by the auctions that sold off the ill gotten personal property of Bernie and Ruthie Madoff. The Madoffs, as was befitting of a couple with great (albeit fake) wealth, had pretty expensive tastes – think Rolex watches and alligator purses. Sure, they had some pedestrian every day stuff, too, but even that was pretty nice. The auction raised over $2M. Nothing compared to the Madoff pyramid rip-off, but a goodly amount, even if only a drop in the ice bucket. I don’t know who did the Madoff bidding. A lot of the items were bid up well beyond pre-auction estimates, so there must have been some element of interest in the notoriety more than just the desire to get their hands on the goods. I can’t imagine overpaying for something just because it’s connected to the fake rich and (in)famous, but to each his own. And as rotten to his evil little core Bernie was, he wasn’t a stone-cold killer.

The auction of the household effects of James “Whitey” Bulger and his girlfriend-in-hiding Catherine Greig differed from the Madoff auction in quite a few ways.

The contents of the Bulger auction were a lot more pedestrian and tawdry. When they showed the items on the news the night before the auction, it looked more like a downside yard sale than an upscale auction. Lots of what appeared to be polyester shirts on hangers, out and out crapola. And then there’s the really critical difference: Whitey Bulger was, indeed, a stone-cold killer. Anyone who got in this SOB’s way well, look out.

I just can’t imagine who would want anything associated with this bum, even if the “cause” – all the proceeds went to the families of his victims – was a good one.

Some fellow paid $210 for Bulger’s used footwear. He plans to “relax, sit around, an drink a beer in Whitey’s slippers.” Seriously, who wants to slip on anyone’s used slippers, let alone those of perhaps the most vicious criminal ever to hail from these parts?

A guy who clearly has too much extra money on his hands walked away with Whitey’s rat-shaped pencil holder, for which he paid $3.6K. (For those who aren’t up on their Whitey lore, he was an FBI 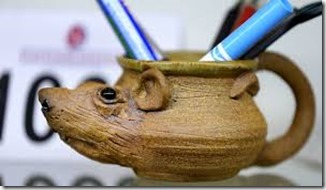 informant, ratting out Italian mob members to keep the heat off of his own Irish mafia.) Perhaps this guy, who is 47, is going through a mid-life crisis. The fact that he also bought a replica of the 1986 Montreal Canadiens Stanley Cup championship ring for $9.1K suggests that this may well be the case. (Before Bulger went on the lam with Greig, he did a bit of a lam-een with his other girlfriend, Theresa Stanley. When Stanley realized that being on the lam meant that she wouldn’t be seeing her kids again, she bailed. After which Bulger tapped his number two boo, Greig. One of Stanley’s daughters was married to Chris Nilan, a local kid who made it to the hockey pros. Thus the Stanley Cup replica ring.) The final item in this guy’s sweep was Whitey’s hand-carved crucifix.

Talk about a Boston trifecta: us (Irish-American criminals, both criminal-criminals, and, as it turned out, FBI-criminals) vs. them (Italian-American criminals); the local sports hero connection (which would only have been improved upon if Nilan had won the Cup with the Bruins); and mawkish Catholic sentimentality, as in the hand-carved crucifix. Can you say wicked pissah? If only we knew who hand-carved that crucifix.

The item that brought in the most was a gold diamond Claddagh ring. This went for $23K. I realize that there’s no such thing as a subtle Claddagh ring (hands holding heart), but one with diamonds? That was owned by Bulger? Ugh. Just ugh.

Speaking of ugh, another bidder paid $6.4K for the hat Bulger was wearing when the Feds finally caught up with him. What does one do with this item? At least you can melt down the Claddagh ring.

Another fellow gave the “winner” of the rat mug and Stanley Cup replica ring a run for his money by paying $5.2K for Bulger’s “psycho killer skull ring,” $1K for 10 of Bulger’s hats, an $4.9K for the boxing mannequin Bulger “topped with a safari hat and propped in the 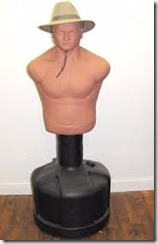 window of his apartment to make it appear as if someone were keeping watch.” (Source: Boston Globe)

I’m all for the quirky decorated touch, but what in the world would you do with this nudie torso “topped with a safari hat”? Plug ugly, plus the ghastly association with Bulger.

I will note that all of the bidders mentioned in the article were middle-aged men. (Most with Irish-sounding names, I’m afraid.) Must be a lot of mid-life crises going around out there. (Coupled with some sort of perverse ethnic pride.)

One bidder was doing so because he’s a friend of Greig’s sister. This guy bought a bunch of pictures of cats and dogs, “many the beloved pets of the gangster and his girlfriend.” He also managed to snag “Bulger’s and Greig’s black leather, reclining loveseat, purchased for $35.” Straight out of Bob’s Discount Furniture, no doubt.

Whitey’s in his eighties, and will die in prison. When Greig gets out of prison – she’s in her mid-sixties, and will be released in 2020 – she can live out her final days reclining in her love seat, looking at her pet pictures, and asking herself why she was willing to toss away 15 years of her life hiding out with a vicious killer. At least Theresa Stanley had the good sense to have Whitey drop her home…

Meanwhile, the auction raised $109K. The Madoffs’ personal effects auction cleared over $2M. I guess the Rolex is mightier than the rat mug.