Duckpin bowling’s dying out. (And I thought candlepin was weird…)

The first time I went bowling was on an outing with the Junior Catholic Daughters of America. Not familiar with the JCDA? It’s the young lady (11-18 years of age) branch of the Catholic Daughters of America, which was the ladies’ branch of the Knights of Columbus. It’s an organization that I was member of during 7th and 8th grade. I don’t actually recall joining. I think that all the girls in our school may have been automatically enrolled. Anyway, we wore hideous kelly green skirts (perhaps in honor of the Irish heritage of the founding – and, at least in our parish, current – members) and white blouses. We had meetings where nothing much happened. We went to church – I remember putting on a chapel veil. And, every once in a while, we had an outing, like going to a rundown amusement park or bowling. (Fortunately, we didn’t have to wear our uniforms on our outings.)

Admittedly, this is a truly terrible, eye-rolling-ly-bad score. But, back in those days, there were no bumpers to flip up to prevent gutter balls. Let kids learn the hard way! And this was, after a 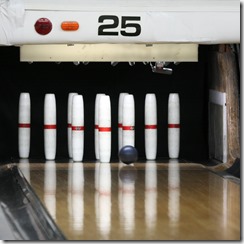 ll, candlepin, a variation on bowling that uses small balls, straight pins, and was, like the smiley face, invented in Worcester, Massachusetts.

Lots of people – not me, of course, the highest score I ever achieved bowling was 120 or so – have made perfect scores with ten pin bowling (or, as we called it, big-ball bowling). The highest score ever recorded for candlepin was 245. For women, the number is 207.

Candlepin was pretty much only played in New England and, when I was growing up, it was the more prevalent form of the game. There were, in fact, plenty of Saturday afternoon TV shows devoted to it, including my favorite, “Candlepins for Cash.”

And then there’s duckpin, an even odder duck in the bowling world.

Duckpin, like candlepin, uses a smaller ball, but the pins look like short stubby versions of ten pins. Like candlepin, duckpin’s also a local phenomenon, mostly played along the Eastern Seaboard, primarily in Maryland, Rhode Island and Connecticut.

And, as the NY Times recently told us, it’s becoming even more of a lost art than candlepin. Which is too bad for Pittsfield’s Amy Bisson Sykes, who is the world’s top female duckpin bowler, a bowler:

…who dominates a black ­and­ white pastime in a Technicolor world. Her sport is so yesterday that 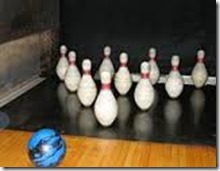 whenever another duckpin alley closes, the remaining alley owners descend like predatory relatives to cart off the mechanical parts of duckpin setting machines that have not been made in two generations. (Source: NY Times)

Those duckpin setting machines haven’t been made in two generations because the guy who invented it wouldn’t sell the patent to Brunswick when his company went out of business. Kenneth Sherman thought that Brunswick, which dominated the ten pin world, would just shut duckpin down and put it out of business. Effectively, that’s what happened anyway. Seriously, who wants to be a ball setter? (It was, I will note, one of the many crappy jobs my father held as a kid. Work was work.)

No new automatic pinsetters means no new alleys. Today there are 41 congress ­certified duckpin bowling alleys, down from nearly 450 in 1963.

I believe that’s bowling congress, not Congress congress certified. But, come to think of it, certifying bowling alleys might well be a better use of their time. Are you listening Paul Ryan? Nancy Pelosi?

Meanwhile, I didn’t look all that hard on the stats on candlepin, but I suspect that it’s on the decline as well. As is bowling, overall. (C.f., Bowling Alone.)

To all those armchair athletes rolling their eyes instead of balls, let’s be clear: Odds are, you’d be lousy at duckpin. The grapefruit­size ball weighs less than four pounds and has no finger holes, and the squat duckpins look like out­of­shape cousins to the more familiar bowling pin. And even though a turn can include throwing three balls, instead of the two in the more common game of tenpin bowling, scores are still much lower. According to the United States Bowling Congress, there were 55,266 certified 300 games — that is, 12 consecutive strikes, for a perfect score — in the 2013­14 season of tenpin bowling. But there has never been a 300 game in duckpin bowling.

Sure, that 279 is 10 percent higher than the candlepin record, but it still ain’t no 300. This all makes me feel less ashamed of my lousy JCDA candlepin score of 13.

Back to duckpin queen Amy Bisson Sykes. She became a duckpinner when her father decided to fulfill his dream and own a duckpin bowling alley. Sykes was 3 when he bought one, and soon she was on her way to record-setting (as a junior, she once rolled 262) and a place on the professional duckpin tour.

Hard to believe there is one, but there you have it. (There’s also a men’s version, not to mention candlepin pro bowling as well. I believe that most, if not all, keep their day jobs.)

I really like regional variations, little oddities, and hope that they never die out. I prefer jimmies to sprinkles, elastics to rubber bands, and bubblers to water fountains. I’d like to see the word “tonic” make a comeback. (For those not in the New England know, tonic=soda.)

And may Amy Bisson Sykes bowl long and prosper.

Thanks to my sister (and fellow JCDA alumna) Kath for spotting this article and rolling it over my way. Strike! (Or at least a spare…)