“The World’s Best Restaurant”? What can this possibly mean?

Well, just in case you’ve been holding your breath – or holding out on making a reservation for your next dining experience – Osteria Francescana, Modena Italy, has been named the world’s best restaurant. Really. Really?

I’m sure that it’s a swell place. After all,

Osteria Francescana is filled with artworks collected by [Massimo] Bottura, and the dishes reflect his love of artists such as Ai Weiwei and Wassily Kandinsky. They are colorful and exuberant, complex and fun—yet totally focused. His Caesar Salad in Emilia may look like naked lettuce, but hidden inside are 15 ingredients: the cheese in the form of crispy wafers; the eggs cured in salt and sugar and then air-dried until they are hard enough to grate; the tomatoes strained through cheesecloth for at least 12 hours. (Source: Bloomberg)

Okay, if you’re like me, you’d rather eat out at a place that was willing to strain tomatoes for 12 hours, and cure an air-dry eggs until they’re hard enough to grate than do it yourself. So I’m sure that any restaurant willing to go to these lengths is a swell place.

As it turned out, I’m so out of it, I’d never actually heard of Weiwei until I saw this article on the world’s greatest restaurant. But, as it also turned out, I had actually seen some Weiwei, up close and personal, just the other day.

Out on a walk with my cousin MB on Boston’s Rose Kennedy Greenway, we ran across a group of giant bronze animal heads surrounding a splash fountain that kids play in during the summer months. We made a few comments revealing just what sort of philistines we are – we thought the sculptures were weird, creepy; we hoped that they weren’t permanent – and went on our way, which was to 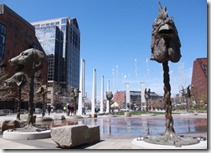 the Saturday Greenway craft fair. And now, come to find out, what we were commenting on, in our philistine-ish way, was Weiwei’s “Circle of Animals/Zodiac Heads”, which is “intended ‘to highlight global issues of looting and repatriation of cultural treasures.” Pink Slip to Weiwei: repatriate away.

Fortunately, from my pedestrian perspective, they’re only here until October.

Just one more sad indicator that I apparently know as much about fine art as I do about fine dining of the 12-hour tomato straining variety.

In my day, I actually ate fairly often at some quite highly-rated restaurants, especially on trips my husband and I made to NYC over the years. On our last few trips, we managed to eat at some Boulud or another, some Bernardin or another, and the Jean-Georges (located, I am embarrassed to admit, in some Trump building or another). Back in our early days, we swore by the late and lamented Côte Basque, the late and lamented (at least by us) Lutèce, and the late and lamented (at least by us) Caravelle. We also had one memorably terrible meal at The Four Seasons. With the exception of The Four Seasons, these places all folded in 2004, which was actually well after we had stopped bothering to eat there on our trips to New York. But fancy dining out remained a fun part of our frequent NYC trips.

Of the NYC “biggies”, our favorite was La Côte Basque, where they had a fabulous seafood terrine, a great beef dish (name forgotten: the gravy was to die for), and a spectacular chocolate cake. In quest of these and other delights, we’d often hit the Côte a couple of times on a trip. Because we were nowhere near as poshly dressed (to put it mildly) as most of the diners, I know that there was occasional eye-rolling when we came in. One time, the waiter whose section we were put in eye-rolled something to the maître d', who sotto voce’d back to him, ils sont très gentils. Well, yes, we were very nice, but I’m sure what he meant was “they may look like rubes, but they tip well.”

Another memorable experience there was the time my husband complained about the smoked salmon appetizer, telling the waiter it wasn’t up to their usual standards.

Given that my husband was known to eat tuna fish straight out of the can, I thought it was completely ridiculous that he felt that his refined palate could discern the difference between one pricey smoked salmon and the other. But, as it turned out, the restaurant had recently changed the source of their smoked salmon from Norway to Scotland (or the other way around), and, according to chef proprietor Jean-Jacques Rachou (who came out of the kitchen in his toque blanche to speak with us), they had not done the same lengthy vetting process they usually did when changing sources. He apologized profusely, and came out at dessert time to whip up a Chantilly cream with Grand Marnier that he dolloped onto to our chocolate cake for us.

So, anyway, I’ve been to plenty of really good restaurants, and I know that there can be some place that’s a favorite. And there can be plenty that are pretty darned good (if not great). But there are an estimated 15 million restaurants worldwide, leading me to believe that there’s really no such thing as the world’s greatest restaurant. Just more silliness, brought to us by the folks who think that it really matters that someone takes 12 hours to strain a tomato…

Resonant Brain said...
This comment has been removed by the author.
5:50 AM

The beer selection at this place was great and rotates often. Everyone who works there makes you feel welcome. At venues in Chicago they remember your favorite drink and you will be glad to tweet about them.