MLK Day
It's Martin Luther King Day, and Pink Slip is observing it by partially taking the day off.

What will I be doing?

Although it's a day when volunteering is encouraged, I'm sitting this one out. I volunteered on Saturday. I'm volunteering tomorrrow. And on Thursday. So I'm good. (Obviously, I didn't give up virtue signaling for MLK Day.)

Kerri Greenidge, author of Black Radical: The Life and Times of William Monroe Trotter, will be talking about her book at The Boston Athenaeum, and I'm going to that. Until I saw an article on Trotter (and the Greenidge book), I wasn't at all familiar with the man, other than being aware of a Boston public school that's named after him.

Trotter was the founder of The Guardian, a black newspaper that achieved a national readership, and was an all-round activisit. Among other things, he led protessts against the spectacularly racist D.W. Griffith film, The Birth of a Nation. (You know, sometimes cancel culture is a good thing.)

Anyway, a writer friend of mine is introducing Greenidge, and I'm sure her introduction and Greenidge's talk will be great. And I'm happy to be doing something to honor Dr. Martin Luther King.

(As for The Athenaeum, founded in 1807 - and just up the street from where I live - it's one of the oldest independent libraries in the country. I'm a member, but don't do anywhere near enough hanging out in this beautiful and completely quirky place. (Note to self: start spending an afternoon or two a week at The Ath...))

For our next topic:

That said, I'm just as happy that male-pattern baldness affects, well, males. (Thank you, testosterone.) But that said, there's no reason why women have to have more hair than men, other than that it's what in our culture we're most used to. There is such a thing as female-pattern baldness, but, until old age, that's less common.But most women as they age will experience some hair loss over time. (Another note to self: check the bathroom sink.)

Then there's alopecia. Actually, male- and female-pattern baldness are forms of alopecia. But when we think about alopecia - if we think of it at all - we're likely thinking about total baldness - head, eyebrows, eyelashes.

Alopecia is an autoimmune condition, and affects both men and women. But African American women may be more prone to it than others.

One of those African American women is Ayanna Pressley, who's a member of Congress from Boston (and the most low-key member of The Squad, which also includes Alexandria Ocasio-Cortez, Ilhan Omar, and Rashida Tlaib). Pressley's's not my representative, but I'd be just as happy if she were. But in 2018, I wasn't all that happy with her. She primaried and took out Mike Capuano, perhaps the most progressive person in the House. Would that she'd primaried and taken out my Congressman, Stephen Lynch, who's more of an old-school lunchbucket Democrat rather than a progressive. But it was Pressley's time, and she beat Capuano and won handily in the general.

Late last week, just in time for MLK Day, Pressley revealed that she has recently lost her hair due to alopecia.  Here's a link to the video where she made her announcement - definitely worth a view, as has a lot to say about her hair specifically in reference to herself and her identity as a black women. And here are her "before and after" shots. 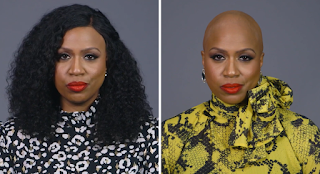 I told you bald is beautiful!
Posted by Pink Slip at 5:00 AM