On my mother's recipe card, she has written FRUIT CAKE, but it was always called "Daddy's Favorite", and I made it the other day.

I made it because tomorrow is the 49th anniversary of my father's death, and I've been thinking about him more often lately because of this.

I made it because my brother was coming over to dinner the other night.

In terms of serving it to my brother, I could have saved myself the trouble. How did I not know that he didn't particularly care for it? I knew my sister Kath likes it, and that Trish doesn't. I guess I just assumed the Rick was a fan because he doesn't have a particular sweet tooth, and "Daddy's Favorite" (despite the 2 cups of sugar that goes into it) isn't especially sweet. And because Rick - although he's a blue-eyed blond (okay, he's gray now) and my father was black-haired with hazel eyes, and although Rick is a lot taller and bigger in general than my father was - is my father's spit and image. (Oddly, both my brothers look exactly like my father, though they don't look anything alike. Go figure.)

I did make it up, dinner-wise, by serving meatloaf. My mother's recipe, more or less. She used Saltines crushed to crumbs using a rolling pin; I use pre-fab breadcrumbs. Also, I used the pan she used for meatloaf - an aluminum rectangular baking pan (the same one I had earlier used to bake "Daddy's Favorite") - because in our house, mealoaf wasn't really a "loaf". It was cut in flat squares, like a lasagna. Like a cake. Like "Daddy's Favorite."

The meatloaf was quite good. "Daddy's Favorite" even better. I put half of it in the freezer, but have been enjoying the rest as a grab and gulp, or with my tea. I gave a couple of pieces to a friend who came by the other day. 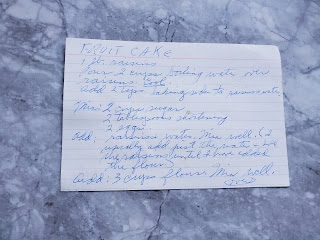 "Daddy's Favorite" completely hits the spot, and that spot is made even better because I used my mother's hand-scrawled recipe, her mixing bowl, and her aluminum baking pan.

There is nothing like seeing something in the handwriting of someone you love who is no longer on earth to get you going. (When I come across something my husband has written - especially if it's in his famous red ink - I still tear up, even six years after Jim's death. Jim, by the way, was a big fan of my mother's meatloaf. I can't recall where he stood on "Daddy's Favorite.")

I don't know the ur source of the "Daddy's Favorite" recipe, but I do have a theory.

A few years ago, I was in Ireland with my sister Trish, her daughter Molly, and our friend Michele. We were in Galway while Molly was finishing up her semester abroad. One afternoon, when Trish was helping Molly move out from her student digs, Michele and I went out for a walk and came across a little artist gallery-tea room. We browsed a bit and, since the day was gorgeous, decided to sit outside and have a cup of tea.

Barmbrack was on the menu.

Now I've been to Ireland many, many times, but had never had brack, so I decided to order it to have with my tea.

And once I took a bite, what to my wondering mouth did appear?

Turns out "Daddy's Favorite" is barmbrack. Who knew? Not me, for sure. And those who might have known - my mother, my Aunt Margaret, my grandmother - are long gone.

Anyway, I'm guessing that the "Daddy's Favorite"/FRUIT CAKE recipe likely came to my mother by way of my father's mother by way of her mother. So I'm thinking it's Ballymascanlon, Co. Louth barmbrack we're talking here.

If you want a nice little cakey thing to go with your tea, here's the recipe:

Mix:
2 cups sugar
2 tablespoons shortening. (Not specified, but I use Crisco, as my mother did.)
2 eggs

Add:
Raisins and water. Mix well. (Here's my mother's aside - verbatim: I usually add first the water and hold the raisins until I have added the flour. I followed my mother's instructions.)

Bake for approx. 1 hour, either 350 degrees or 375 degrees depending on your oven.

Use 13x9" greased and floured pan.

My notes: I baked at 375 degrees, but this was more due to using a metal pan (vs. glass) than anything to do with my oven. It was ready a bit before one hour.

I'm about to put the kettle on, and have myself a piece (or two) of "Daddy's Favorite."

I will think about my father.

But how rotten, how cruelly unfair, that he was only allotted a stingy 58 years. That he was sick off and on (progressive kidney disease) for 7 years before he died. That he left my mother in a heap of grief, and 5 bereft kids  - 23, 21, 18, 15, 11 - who'd been fearing his death each time he ping-ponged in and out of the hospital during  those 7 years - without the wonderful, decent, generous, quick-tempered, hard-working, wickedly funny, imaginative, feisty, story-telling, athletic, backwards-skating, vibrant father who loved his children fiercely. When my father died, we felt like orphans.

My father never did make it to Ireland, but he was a tea drinker, and I like to think of him, sitting in the front yard of that little gallery-tea house in Galway, ordering his cup of tea, ordering a side of brack. And lighting up when he recognized his grandmother's recipe.

We only heard my mother's side of the conversation, but if my father was away - he was a salesman, and traveled on business; and in the last 7 years of his life also logged plenty of hospital time - my mother's last words to him before she hung up were always "I love you, too, kid."