The big news in France last week was that rocker J 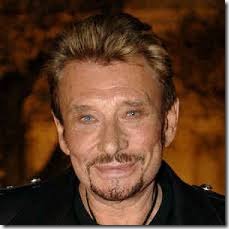 ohnny Hallyday - France’s version of Elvis - has, metaphorically speaking, left the building. On Saturday, his funeral procession made its way down the Champs Elysées from the Arc de Triomphe. France’s president, Emmanuel Macron – who, amazingly, was called by Johnny’s wife at 2 a.m. the night he died -  spoke at his funeral Mass. A nation mourned.

New Yorker writer Adam Gopnik, who logged a number of years in Paris, had a good piece about Johnny, in which he admitted the France’s affection for the singer was somewhat mystifying. As he wrote:

There is no complete accounting for national taste in pleasure any more than for individual taste in love.

And here’s what Gopnik wrote to provide a bit of context to that “no complete accounting for national taste”:

Johnny—he was never called anything else—for those who have not been paying attention to the French tabloids for the past fifty years, was the single greatest and most beloved pop star of France. Born Jean-Philippe Smet, during the Occupation, by legend he took the name Hallyday from an “American relative.” He came to be called the “French Elvis,” and this was true—but it was not true in the way that, say, Charles Aznavour could be called the French Sinatra, or the great Charles Trenet the French Noël Coward.

To use those names was to approximate, in terms familiar to us, remarkable artists who finally had to be understood on their own terms. Johnny was the French Elvis in more or less the same sense that an Elvis impersonator in Branson, Missouri, is the Missouri Elvis: he dutifully imitated the manners of the master while translating them into his own personal style.

The titles of some of Johnny’s hits suggest the painfully persistent note of wistful pastiche: “Joue Pas de Rock’n’Roll Pour Moi” (“Don’t Play Rock and Roll for Me”); “C’est le Mashed Potatoes”; “Laissez-Nous Twister”; “Quelque Chose de Tennessee.” In each case, the American idiom was laid out painfully, aspirationally, over a straight up-and-down of the scales of French chanson style, with bad drumming added.

Johnny just did it. Maybe so. But I can promise you that he did not ride in the tour bus with his band. At least not in France, in the summer of 1973.

My friend Joyce and I were hitchhiking around Europe, and somewhere in France – near Carcasonne? it was definitely in the boonies – we got a lift with his tour bus.

We’d heard of Johnny Hallyday. And I’m pretty sure I would have seen him on Ed Sullivan, a Sunday night viewing staple in the Rogers’ household. I’m sure that we (my entire family, with the exception of my way-too-nice mother) would have made some fun of him, in much the same way we made fun of dancing bear and spinning plate acts, and Topo Gigio. But I wasn’t familiar with his oeuvre, that’s for sure.

We knew it was the Johnny Hallyday band because his name was emblazoned on the side of the bus. We were pretty excited hopping on. Here we were, a couple of American girls, and we were going to get to meet a French heart throb. Alas, when we inquired about the whereabouts of Johnny, the band members just gave us a Gallic shrug, one of them telling us, “Oh, Jawn-eeee, he does not ride ze bus. Jawn-eeee flies.” Quel dommage! How much fun would that have been? Joyce and I, too, might have been joining France, and their cute president, Emmanuel Macron, in mourning.

We weren’t on the bus that long. We were heading to Point A, they were heading to Point B. This was July 1973, and Johnny Hallyday was touring all over France. Did they offer us tickets to a concert? I don’t recall. (Unlike Blood, Sweat & Tears, who made me so very happy when I waited on them at Durgin-Park in the summer of 1972 when they gave me two front row tickets to their gig.) We parted on good terms. I think they gave us something to eat.

If you want to see Johnny in his prime, here’s a link to his version of “Let’s Twist Again.” And yes, I did get up and do the twist in this honor. And, no, I wasn’t wearing a pajama-looking outfit like the girls in that video.

Email ThisBlogThis!Share to TwitterShare to FacebookShare to Pinterest
Labels: culture