I don’t know how I missed this when The Economist took it up last summer, but it appears that there’s an increasing demand for exorcists in Europe. Yes, Europe. Post-modern, irreligious, cathedrals-for-tourists-only Europe. And because the Catholic Church has been a bit neglectful of the practice, openings have occurred for independent operators – independent of The Church, that is.

One such indie is Philippe Moscato.

In casual clothes and chatting about the tools of his trade—a “Vogel” crystal, compass, steel crucifix, pendulum and bag of salt from Jerusalem—he says he can deliver unreal results. (Source: The Economist)

I’m guessing that this is truth in advertising, and that the results that he gets are unreal.

Hired to exorcise an apartment in a wealthy district of central Paris, he predicts that the air will change. In the winter, he says, the owners will no longer need their central heating, the result of beneficial vibrations.

Hmmm. Think of how great it would be to have beneficial vibrations vibrating in your home, so beneficial that you didn’t need to put the heat on when there’s a wind chill of –10 degrees come January. I just knew Moscato’s results would be unreal.

Mr Moscato’s work involves first waggling a pendulum, supposedly to assess the flat’s readiness, then lighting a candle, reciting from an exorcism manual, before blessing salty water that he splashes in every room. As he sprinkles, he delivers a flow of incantations.

Actually, this sounds kind of boring. I mean, waggling a pendulum and sprinkling salty water around. In the old days, didn’t exorcists have to do things like hold levitating bodies down, and dodge spewing pea soup from Linda Blair?.

It’s reasonably lucrative work – €155 ($178) for an hour’s work, and between property and human exorcisms, Moscato gets about 4-5 gigs a week. Not a great living, a good hourly rate. Maybe he has a day job? Other non-priest exorcists mentioned in the article charge more, and one claims that in a good month, he has pre-tax income of €12,000. But that’s working at 15 hour day.

The rising demand is attributed to TV shows like Fox’s “The Exorcist”, which is popular in France. And to the fact that there are more African immigrants around, who believe in things spiritual while not necessarily believing in things Catholic, thus making them more open to lay exorcists. Fear factor also plays a role. After terrorist attacks in Paris and Marseilles, demand surged. And then there’s the internet, where people can now easily find someone to rid them of the devil. (“Who you gonna call? Fantôme busters!)

House and business exorcisms and blessings are more popular than those involving humans, which are quite a bit riskier:

…occasionally victims of violent rituals, including children, have been killed in beatings that are supposed to chase evil spirits from a person. The more responsible fee-charging exorcists say a diagnosis or exorcism of a person should happen only after a patient has consulted a doctor or psychiatrist. (Source: The Economist)

This could get dangerous. If I were M. Moscato, or one of the other exorcists – in the article, all were male, I believe – I’d stick with waving my pendulum and salt water around people’s homes, in hope of freeing them from the thermostat and heating bill.

Meanwhile, if you’re one of those folks 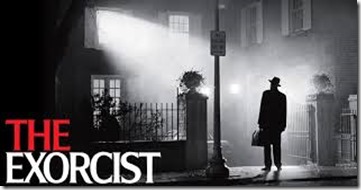 who accept no substitutes, and wants a real bona fide exorcist straight out of The Exorcist - the movie, not the Fox show – the International Catholic Association of Exorcists does have “200 members on 6 continents,” and a “mission to provide relief to those impacted by Satan and his minions.” Ordained clergy, only, thanks (Catholic, Orthodox, et al. – no Protestants need apply). And a “strict validation process.”

No word on whether they can lower your heating bills. I think their focus is more on the Linda Blair situations…

Email ThisBlogThis!Share to TwitterShare to FacebookShare to Pinterest
Labels: interesting business, other places