Two ex-Googlers walked into a bar…

Us Baby Boomers get plenty of opprobrium heaped upon our graying heads. The generation most-likely-to-be-vilified gets credit for nothing, but blamed for not doing anything about global warming, not saving enough for retirement, selfishly staying on the job, running up housing prices so that no one else can buy (although somehow we do get to sell and fritter away the profits), cashing in on the last of the pensions, ushering in the ‘anything goes’ mentality, raising a generation of slackers, and, lest anyone forget, electing Donald J. Trump. Wrack, meet ruin.

I’m not here to defend my generation. But I am here to predict that, at some point, someone’s going to come to the stark realization that no cohort was, is, or ever will be worse than the millennial sub-generation of techno-hipster-entrepreneurs out to disrupt the failing, boring, useless old way of doing things, no matter who or what gets in their way. Who cares, when you’re on a way to making more bucks than your parents would have thought imaginable. Make that bitcoins, I guess. Bucks are so yesterday.

Yes, a lot of what the whiz kids are inventing is going to come in handy when us boomer-geezers slip on a banana peel and need assistive technology. And I’m sure betting on them to come up with something that will part the seas so that they don’t flood the East Coast as far inland as Worcester. Yet they do seem to spend an inordinate amount of time being smug and obnoxious.

The latest news on that front comes from Fast Company (by way of my sister Trish), and is about Bodega, a start up created by a couple of ex-Googlers who “want to make bodegas and mom-and-pop corner stores obsolete.”

An app will allow you to unlock the box and cameras powered with computer vision will register what you’ve picked up, automatically charging your credit card. The entire process happens without a person actually manning the “store.”… “The vision here is much bigger than the box itself,”[co-founder Paul] McDonald says. “Eventually, centralized shopping locations won’t be necessary, because there will be 100,000 Bodegas spread out, with one always 100 feet away from you.” (Source: Fast Company)

Tough noogies, I guess, if you want a Butterfinger and every one else in your apartment building prefers Milky Ways. But, hey, your corner store doesn’t carry everything, either. And so far, non-perishables only. So no running out for bread and milk. (You’ll have to order that from Amazon and have a drone drop it on your window sill.)

There are already 30 proof-of-concepts in the Bay Area. And here’s what they look like: 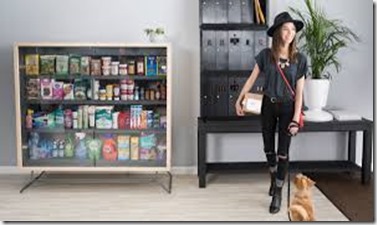 I’ll say one thing for it, it strips out the mind-numbing number of choices on offer at the average CVS that has you spending 20 minutes trying to figure out what toothpaste to buy. And I will admit that there have been plenty of evenings when I would have been happy to be able to walk into the foyer of my condo building and have a vision system record that I’m taking a bag of Tate’s chocolate chip cookies – there on the top shelf, four in from the left - off the box’s hands. (They really do taste like homemade…) And points for stocking DiCecco pasta.

But just what are these darned kids doing – other than trying to come up with unicorn disrupters – that’s so all-fired important that they don’t have time to walk to the corner store and buy something there?

If you live in a big city, you’re probably not much more than 100 feet from a store already.

Needless to say, Bodega is venture-backed, and they hope to have more than a thousand of their shops across the country by the end of next year.

The major downside to this concept–should it take off–is that it would put a lot of mom-and-pop stores out of business. In fact, replacing that beloved institution seems explicit in the very name of McDonald’s venture, a Spanish term synonymous with the tiny stores that dot urban landscapes and are commonly run by people originally from Latin America or Asia. Some might bristle at the idea of a Silicon Valley executive appropriating the term “bodega” for a project that could well put lots of immigrants out of work. (One of my coworkers even referred to it as “Bro-dega” to illustrate the disconnect.)

Bro-dega. I like that. Because, in truth, the thing I find most smug and obnoxious about this concept is the use of the word “bodega.”

Bodega did surveys in the Latin American community and supposedly no one was bothered by the name, but I have some doubts here.

I really don’t give two hoots about cultural appropriation. I think most of those arguments are utter nonsense. Still, bodega to me says bustling little shop in a busy neighborhood, likely run by someone from the Latinx world. In Manhattan, a lot of the corner mom-and-pops aren’t bodegas, they’re “Koreans” because they’re owned and operated Koreans. In my area in Boston, we have small food stores, but they’re not for the most part mom-and-pop convenience stores. But I do occasionally stop in a mom-and-popper on my walks, and they seem to be run by a variety of ethnic groups. And there’s always some old tad buying a copy of The Herald and a couple of scratch tickets, an hanging around talking to the clerk.

Growing up, the mom-and-pop stores were called, for some reason that I believe is particular to New England, “spas.”

We lived right off Main Street in Worcester, and our closest store was a real (albeit old fashioned) grocery store. But there were “spas” in the neighborhood. The one I spent the most time and coin at was Carrerra’s, which sold penny candy. It was in the basement of a three-decker near The Oval on Sylvan Street.

(The Oval in itself was something of a peculiarity: a large, sun-baked crab-grass covered oval at the confluence of a bunch of streets. Kids played ball there, and big boys hung out, but it wasn’t really a park in any true sense of the word. Just The Oval.)

Perry’s. Carrerra’s. The one on the corner of Main and Ludlow. (Did it even have a name?) Spas – our bodegas – were real places, owned and run by real people. Mr. Carrerra could be a crab, but mostly he and Mrs. Carrerra were infinitely patient with the kids coming in with their nickels to buy penny candy. They were immigrants – the name sounds Italian, but I believe they were Portuguese. (We didn’t have either in the neighborhood, so what did I know?) Sometimes their son Butchy worked the store. Mostly I remember him looking sullen, plopped on a folding chair. (His parents never sat.)

I don’t imagine that machine learning will ever learn that the people in a building want an assortment of Squirrel Nuts, Mary Janes, buttons, wax lips, candy cigarettes, Mint Juleps (two for a penny – excellent for sharing), licorice whips, wax buck teeth…

Nor will the Bodega boxes give out candy bars on Halloween. So what if what Carrerra’s gave out was the execrable 3 cent Lunch Bar? (Was there even any chocolate in it?) Carrerra’s was on everyone’s trick-or-treat go-to list.

Anyway, when Bodega tries to expand to New York City, Frank Barcia will be waiting for them. Garcia chairs the

“…New York State Coalition of Hispanic Chamber of Commerce, [and] represents thousands of bodega owners. Garcia’s grandfather was the head of the Latin Grocery Association in the 1960s and was part of the original community of immigrants who helped settle on the term “bodega” for the corner store. “To me, it is offensive for people who are not Hispanic to use the name ‘bodega,’ to make a quick buck,'”Garcia says. “It’s disrespecting all the mom-and-pop bodega owners that started these businesses in the ’60s and ’70s.”

In fact, Garcia would consider making it harder for McDonald to set up the pantry boxes within his community. “I would ask my members  not to allow these machines in any of their properties in New York State,” Garcia says. “And we would ask our Hispanic community not to use the service because they are not really bodegas. Real bodegas are all about human relationships within a community, having someone you know greet you and make the sandwich you like.”

Bodega’s not exactly quaking in their boots. In fact, they envision a world in which mini-Bodegas are everywhere.

Over time, McDonald hopes to be able to create partnerships with other retailers to bring mini-versions of their stores to where they are needed. Home Depot might set up little Bodegas at construction sites with the 100 most-requested items there, Staples might set one up inside an office, or GNC might have mini-stores in gyms.

Because, God forbid, you actually have to wait a couple of hours to get your Super Wheybolic Powder delivered from GNC, or have to walk to a Staples to buy a stack of yellow pads. And actually have to interact with someone, other than a machine that’s learning all about you.

I’ll say one thing about the Boomers. We knew how to have relationships with something other than a device full of 100 items.

(And I thought Mr. Carrerra was an old crab…)

Email ThisBlogThis!Share to TwitterShare to FacebookShare to Pinterest
Labels: consuming, growing up, technology