Arguably, two of the ugliest statues in Boston are the ones that make up the Irish Famine Monument. It’s a “compare and contrast” installation, with a skeletal family in rags (before) and a confident, sturdy immigrant family (after). It certainly makes sense to have some type of Famine acknowledgement in Boston, one of the main centers of the Irish 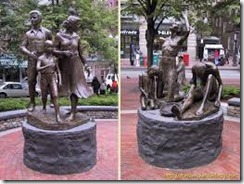 Diaspora, and the landing place for many who fled Ireland in the 1840’s. But this monument: pretty darned hideous. That it’s plunked at the front doors of a Walgreen’s, rather than in a park somewhere – why not the Rose Kennedy Greenway? – makes it a bit ludicrous.

But there’s no arguing the centrality of the Famine in both the Irish and the Irish-American experience. Among other after effects is the incredibly generosity that the Irish (in Ireland) demonstrate whenever and wherever there’s a modern-day famine. Volunteers, donations: if there’s a food crisis anywhere, the Republic of Ireland definitely punches above its weight.

Anyway, with the latest news, the Irish may be able to lay to rest some of the memories and fears that the Great Hunger wrought.

That’s because Ireland was just named the “Country Best Able to Feed Its People.” The U.S. is fourth, following Austria and France.

Ireland is the world’s most “food-secure” nation, improving its food affordability, availability, quality and safety while the U.S. has stagnated, according to a copy of the sixth annual Global Food Security Index compiled by the Economist Intelligence Unit. (Source: Bloomberg)

Not that there’s all that much to worry about here. It’s not like we’re in any danger of becoming Haiti, Burundi, or Yemen, which are all in bottom rankings. Still:

Worldwide, food security fell for the first time in five years, largely because of increases in the number of refugees, weather disasters and a decline in global political stability…

“Food security is in reverse,” said Robert Powell, a senior consultant with the Economist Intelligence Unit in New York. “If we’re aiming for zero hunger, we’re going in the wrong direction.”

The categories that went into the scoring are Affordability, Availability, Quality and Safety, and Natural Resources and Resilience.

A couple of comments here.

Those who’ve never been to Ireland, those who were only there – say – 40 years ago, those who equate their grandmother’s cooking with Irish cuisine…all of these constituencies would be surprised to learn that the food in Ireland is actually quite good. Chicken tastes like chicken. Salmon tastes like salmon. Butter tastes like butter.

Sure, there’s plenty of bad meals to be had in Ireland. It hasn’t sat there a hop, skip and a jump from England all those years not to have a few bad meals rub off. (Think mushy peas.) But, for the most part, you can get fresh and tasty food in Ireland without breaking your back looking for it, or the bank paying for it. Even the pizza’s good.

As for natural resources, other than peat and plenty of rain, I can’t think of all that many. But, man, are the Irish ever resilient.

I walk by that ugly famine monument a couple of times a week, and really don’t pay it all that much attention. But next time I’m on Washington Street, I may give it a nod and pass the news on to that starving family. No more watching the corn and grain exported to England while the Irish dropped dead in the streets. No more corpses by the wayside, with their mouths green from eating grass. No more crawling your way to Queenstown in hopes of getting on a coffin ship.

Ireland, topping the world in terms of food security.

Just read your website. Good one. I liked it. Keep going. you are a best writer your site is very useful and informative thanks for sharing!
Web Design Company in Chennai