Before I went pro in another field – high-tech product management and marketing (yawn!) – I was a professional waitress.

Yes, I’d also been a summer and school-year waitress, lines on the résumé shared by about two-thirds of the women of a certain age I know. (And some of the men, too. I’m looking at you, Ricky T. Only for waiter, not waitress.)

After dropping out of a PhD program at Columbia I probably shouldn’t have been in to begin with, I worked at Durgin Park, a major tourist trap in Boston’s Quincy Market. At one point, a fellow student happened to show up at Durgin, and was seated on my station. “You really were leaving school to be a Durgin Park waitress,” he told me. “I thought you were kidding.”

Anyway, I worked at Durgin long enough to save enough money to spend a few months driving around the country with my friend and fellow waitress, Joyce. And when we got back from driving around the country, we went back to Durgin and worked long enough to save enough money to spend five months hitching and camping around Europe. (Joyce, I will note, also ended up with respectable non-waitressing career. She worked in fashion, and for many years, up until her recent retirement, she had a senior buying position at Neiman-Marcus. Which meant she got to go to every Fashion Week in NYC, Paris, Milan and got to know every big-name designer you can think of.)

I had one more waitressing gig before I went straight and ended up stumbling my way into a “real” career, i.e., a career in which I didn’t come home at night smelling of prime rib and scrod, but – alas – a career in which I no longer had the satisfaction of counting my tips.

For years, at frustrating times on the job, I would say to a colleague, “Well, I can always go back to waitressing.”

It’s pretty clear now that that ain’t going to happen. Which is a good thing. I now have the age and heft more typical of the Durgin Park waitresses of my era. These women were  hearty, ancient crones who’d been there forever. One of them (entering the wrong way) barreled into me when I was leaving the kitchen balancing a half dozen cups full of coffee on my wrist (trust me: it’s doable), so I know up close and personal about hearty ancient crones. I missed a week of work nursing some nasty burns. She didn’t miss a beat.

So while I now have the age and heft appropriate to Durgin Park waitressing, and could probably get up the growly disposition most of them possessed, I don’t think I’d last a shift.

But in many ways I still think of myself as a waitress, and I’m interested in women who end up for whatever reason – generally lack of education and opportunity – as waitressing lifers. Thus, I was delighted to see an article in The Boston Globe the other day about a woman who, post art school, had been more or less one of those lifers.

And then Joan Aylward, in her fifties, was able to make the transition from waitress to artist. It happened somewhat by accident:

“I just didn’t see it happening,” Aylward says now. “I wasn’t doing anything to bring that side out of me.”…

Today, though, in a twist she never saw coming, the 54-year-old has found herself in the midst of a surprising second act: Aylward has emerged as arguably the city’s most prominent and sought-after chalk artist, drawing up trendy custom menus for bars and restaurants all over town. Chances are, if you’ve stepped through the doors of a Boston establishment in the past two years, you’re familiar with her work.

To date, some 150 restaurants in and around Boston have displayed her lavishly designed menu and cocktail boards — from the casual (Tasty Burger) to the elegant (Capo).(Source: Boston Globe)

These days, Joan Aylward is no longer hustling for tips, bussing her own tables (unless she’s at home), or ending her shift smelling like prime rib or scrod (or whatever it is waitresses smell of these days: tiapia? focaccia?). She’s now a professional artist, specializing in 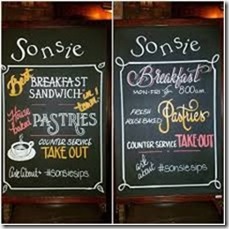 chalk-art signage for restaurants. (By the way, Aylward’s mother never lost faith, and kept nudging her to use her “God-given artistic talent.”)

Her first gig was a freebie for a place she was working. But then word of mouth and the growing on-trend-ness of chalkboard signage put some wind in Aylward’s career sails. In addition to her restaurant clients, she’s also done some corporate work.

The Globe caught up with her on one of her jobs:

I hope that the chalkboard trend lasts for as long as you want it to last. And that if it doesn’t, you can continuing using your “God-given artistic talent” in some other capacity. Toss out those comfy support shoes, the bottoms coated with kitchen yuck. Rag those sweaty shirts. Save the aprons for use in your own kitchen.

What was the line from the Mary Tyler Moore Show? You’re gonna make it after all…

Email ThisBlogThis!Share to TwitterShare to FacebookShare to Pinterest
Labels: jobs